Australia needs to reset the relationship with China and stay cool 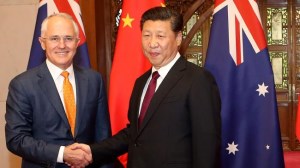 Let’s call it the “China syndrome”. This describes a condition that is a bit compulsive and not always rational.

Australia’s response to China’s continuing rise mixes anxiety, even a touch of paranoia, with anticipation of the riches that derive from the sale of vast quantities of commodities.

Economic dependence on China is two-edged and potentially policy-distorting.

In other words, nearly one-third of Australian goods and services trade is hinged to the China market. Putting it mildly, such a level of dependence on a single market is not ideal.

No other country, relatively speaking, has benefited to quite the same extent from China’s extraordinary development since it began opening for business to the outside world after the Third Plenary Session of the 11th Central Committee of 1978 of the Chinese Communist Party (CCCP).

In 2017, Australia registered the longest uninterrupted stretch of economic growth in modern history. This surpassed previous record holder the Netherlands with 103 uninterrupted quarters.

This is the context in which Australia might do a better job managing relations with its cornerstone trading partner and, arguably, its most important bilateral relationship.

This latter observation requires a leap beyond assumptions that security ties with the US mean there is no relationship more critical to Australia’s wellbeing.

That is changing fast as China’s economic might continues to expand and its ability to project military power in the Asia-Pacific grows in leaps and bounds.

None of this is to say that Australia’s security arrangements with the US versus China’s rise represent a zero-sum game. You could argue that security ties to the US have become more important as a consequence. It is simply to acknowledge the world has changed. It is sprinting ahead of the ability of policymakers to keep up.

Take the 2017 Foreign Policy White Paper, for example. Formulated over the period 2016-2017, the paper asserted the need for Australia to bolster its relationship with the US to take account of China’s rise.

On the other hand, and unavoidably, it acknowledged that the Asia Pacific is no longer uncontested space.

As the paper puts it:

‘Powerful drivers are converging in a way that is reshaping the international order and challenging Australia’s interests. The United States has been the dominant power in our region throughout Australia’s post-second world history. China is challenging America’s position.’

Those “powerful drivers” have become more powerful since publication of the white paper.

At the same time, Australian policy towards Beijing has become more ragged, driven by worries about the impetus of China’s rise, concerns about America as a reliable ally under an “America First” Trump administration, and fears about Chinese influence in Australia itself.

Unwise use of phrase

Between December 7 and 9, 2017, Turnbull said on three separate occasions Australia had “stood up” against outside attempts to interfere in its internal affairs. This was a pointed and, as it turned out, unwise use of the phrase.

On the last occasion, he said it in Chinese, adding offence to Beijing where such phraseology – “the Chinese people have stood up” – has sacred meaning in Chinese Communist Party history. This was the expression Mao Zedong used when proclaiming the People’s Republic in 1949, after decades of foreign interference, including the deaths of hundreds of thousands of Chinese at the hands of the Japanese.

Turnbull’s intervention raises questions about the quality of China policy advice from his own office.

Foreign Minister Julie Bishop had, in any case, irritated Beijing in a speech delivered in Singapore in March, 2017, in which she questioned China’s political model.

While non-democracies such as China can thrive while participating in the present system, an essential pillar of our preferred order is democratic community.

Bishop might have phrased her remarks aimed at “non-democracies such as China” more judiciously, while conveying a similar message.

What is lacking in Australia’s approach to its relationship with China is consistency, so the government speaks with one voice and, where possible, separates domestic politics from the conduct of China policy.

Beijing values consistency. It may not like forthrightness in defence of Australia’s legitimate interests in maintaining its own sovereignty and its own security, but it respects firmness.

Canberra should not shy away from articulating its concerns about China’s continued militarisation of facilities in the South China Sea. It should be on guard in withstanding Chinese efforts to interfere in domestic politics.

Policymakers should bear in mind a simple rule of thumb in dealing with China. It will seek to get away with what it can. That includes bullying and bluster.

Peter Drysdale, emeritus professor of economics at the Australian National University and author of a study of the Australian-Chinese economic relationship, told me the government needs to assert its “control of the China agenda”. This has been pushed off course in the recent past.

Drysdale perceives a “structural problems” embedded in the Australia-China relationship arising from “accelerated complications” in US-China relations. At the same time, Washington’s security establishment is pushing an alarmist viewpoint about China’s regional ambitions.

No reasonable observer pretends China’s impulses are benign. The question is how to manage, in a way that is not counter-productive, China’s attempts to spread its influence

In Drysdale’s view, the greatest risk for Australia is that an erratic Trump administration will undermine a rules-based international order critical to Australian security.

Canberra’s diplomatic efforts over many years have been aimed at drawing Beijing into a rules-based system, promoting certainty in China’s behaviour as a “responsible stakeholder”.

That longstanding impulse of Australian foreign policy is now under stress.

However, what also needs to be kept in mind is that relations between Canberra and Beijing have had their ups and downs over the years. These blips have come and gone.

The question is whether these latest tensions are more serious and lasting than others such as the chill that occurred after the 1989 Tiananmen Square massacre. Or frictions that accompanied Australia’s support in 1996 for the dispatch of US naval forces into the Taiwan Straits after Chinese missile tests during the Taiwanese election.

The Australian government needs a reset of the relationship that would move the two countries past a difficult stage caused by a combination of misunderstanding and loose talk.

Australian officials also need to bear in mind that, in a region in flux, Australia’s Asian neighbours are accommodating themselves to new realities at warp speed. Old certainties such as the validity of US security guarantees are being questioned.

The Turnbull government is operating in a much-changed environment. Stakes are high.

Levels of anxiety about China’s rise are unlikely to fall. Australia needs to keep its cool and avoid falling prey to a China syndrome characterised by unsteadiness and poor judgement.