‘UK wine exports are at their highest level in a decade’
Rachel Triggs, Wine Australia read more
Our new e-magazine is OUT NOW. Click here to read.
REGISTER ADVERTISE
SUBSCRIBE TO OUR FREE NEWSLETTER
PUBLISHED | AUGUST 24, 2015
COMMENTS | NONE
Tweet 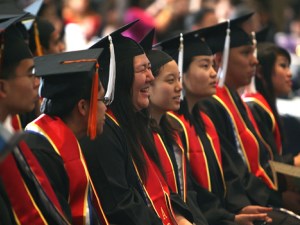 The end of the mining boom has put the spotlight on Australia’s services exports such as education to boost national income.

Fortunately, the nation’s historical advantage as an advanced, multicultural and English-speaking country with ideal proximity to the Asia-Pacific region has made education a reliable contributor to national wealth.

According to the latest Australian Bureau of Statistics data, the international education services sector generated a record high $18 billion last financial year, up 14 per cent on the previous year and eclipsing the previous peak of $16.7 billion in 2009.

The higher education sector earned the bulk of the income, accounting for nearly $12 billion, followed by vocational education and training (nearly $3 billion), English Language Intensive Courses for Overseas Students (ELICOS) at nearly $1 billion, $636 million from schools and another $698 million from non-award institutions.

As reported by Dynamic Export, international education supports around 130,000 Australian jobs, with the weaker Australian dollar also helping boost student numbers. In the first half of 2015, enrolments reached 465,000, up more than 10 per cent on the same period last year, with universities and other higher education providers accounting for 222,000.

Across the nation, NSW earned $6.3 billion in education-related export income in 2014, ahead of Victoria’s $5.3 billion and Queensland’s $2.5 billion. Elsewhere, Western Australia generated $1.2 billion, South Australia $1 billion and the Australian Capital Territory some $400 million, followed by Tasmania’s $153 million and the Northern Territory’s $51 million.

Australia’s competitive advantages in international education include its internationally recognised and high-quality Western education system; its proximity to Asia’s expanding middle classes; and graduate employment opportunities which have been described as “the envy of the Western world.”

Despite the rise of China, English has retained its pre-eminence as the global business language and Asia’s desire for commercial success has made Australia a major beneficiary.

Japan has traditionally rated lowly in English fluency, but the Japanese government’s recent push to develop “global human capital,” known as “jinzai,” has resulted in increased government funding for overseas study along with a push by major companies for greater English usage.

Leading companies such as Fast Retailing, operator of the Uniqlo fashion chain, and e-commerce retailer Rakuten have famously encouraged even meetings of Japanese staff in Japan to be held in English, as part of a push to “go global.”

Entrepreneur Ko Nagata, managing director of Tokyo-based Global Sky Group, says the trend will only increase as part of the drive by the world’s third-biggest economy to “internationalise.”

Having already invested in childcare centres at Queensland’s Gold Coast and New Zealand, Global Sky has recently established its own education business, aimed at expanding linkages between Japan and Oceania.

“Global Sky has just launched our own education offering in Tokyo, tailoring to children aged 4 to 8. We are also offering a “study abroad with family” program in Australia and New Zealand, under which Japanese parents can study at prestigious universities such as the University of Queensland, QUT, Griffith University or Bond University, or at our partner schools, such as award-winning English-language school BROWNS and Charlton Brown, a specialist in aged care and children’s services,” Mr Nagata said.

“For children, we are offering a ‘Hello Kids’ program in which children can be enrolled at our childcare centres in Australia or New Zealand for a short-term period ranging from two hours to a few months. We have tied up with Sunnyside International School in Gifu Prefecture, Japan to help develop stronger ‘global human capital,’ not only in English language but also in improved intellectual, moral and physical education,” he added.

For Australia, initiatives such as those developed by Global Sky are just the tip of the iceberg as Asia increases its focus on acquiring an educational advantage for the 21st century.

Anthony Fensom is an experienced business writer and communication consultant with more than a decade’s experience in the financial and media industries of Australia and Asia.