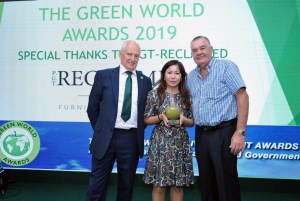 Hosted by The Green Organisation, PGT-Reclaimed was named the international gold winner of Sustainability at an awards ceremony in Ho Chi Minh City, Vietnam recently.

Since the company was established in 1998, Mr Burden has created furniture using old-world carpentry techniques, finished with 100 percent non-toxic water-based materials. All materials are reclaimed and sourced from pallets, buildings, shipping containers or shipwrecks.

“I could not have imagined 21 years ago that making furniture for myself would turn into a thriving business, and have the impact that it does today,” Mr Burden said.

Why cut trees down?

Mr Burden says trees are much more beneficial to the world’s community when they are living, so why cut one down when you can use what’s lying on the ground?

One living pine tree will produce 2,700kg of oxygen annually. That’s enough oxygen for two people to use in a year.

If a mature tree of 30 years old is cut down, it will produce no oxygen and only provide enough timber to make one bed, two bedside tables and one dresser.

The Green Organisation is an independent body dedicated to recognising, rewarding and promoting environmental best practice.

Its founder and managing director, Roger Wolens was impressed with PGT-Reclaimed’s holistic approach – setting an example for the rest of the world.

“The 12 judges were impressed with the ways in which PGT-Reclaimed have preserved the hand-made techniques in both carpentry and finishing, and their ability to use materials so there is no wastage,” Mr Wolens said.

Half a million trees saved

“This impact is not only on PGT-Reclaimed’s customers who enjoy their furniture around the world, but on the environment they operate in, through making green, clean choices.”

Since PGT-Reclaimed was founded 21 years ago, the company believes it has saved more than 550,000 trees from being felled, which equates to oxygen being preserved to benefit 1.1 million people.

PGT-Reclaimed has a factory in South Vietnam employing 700 workers as well as sales staff across the world.

Mr Burden lives in Vietnam with his wife Yung, who is company Brand and R&D Director.

In 2013, the company established has an Australian distribution arm, PGT-Reclaimed (Australia) at Runaway Bay on the Gold Coast, Queensland.