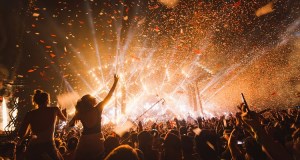 Australian music labels and artists are making a big noise in global markets, according to an industry report.

The Australia Council of the Arts’ Born Global: Australian Music Exports, is the first report of its kind, and puts the value of music exports at $195 million a year.

The report, compiled in 2017, is the result of three years of research by the University of Newcastle and Monash University, in partnership with Sounds Australia, APRA AMCOS and the Australia Council.

The Australia Council’s arts practice director for music, Paul Mason, says: “Music is one of our nation’s most powerful cultural exports.

“When our artists connect with audiences around the globe, they are sharing culture and perspectives.

“The increased number, range and diversity of Australian musicians who are achieving international success is promoting a rich and nuanced sense of Australian creativity in a global context.”

Mason says the report is set to generate discussion on how to grow Australia’s foreign income.

“The insights from this research help to paint a clearer picture of the state of Australia’s exporting music industry, as well as the opportunities for its future, including potential avenues to support the continued growth of the industry,” he says.

In other words, touring is the big winner.

Income from publishing makes up $38 million or 20% of the chart, while foreign income from record labels is $37.5 million or 19%.

Those with support from both government and industry reported the greatest export success.

The biggest markets for Australian music are the US, UK and Germany.

But Britain, in its export income report last September, noted that it also derives income from continent Europe and seeing rapid growth in new markets as China, India and Brazil.

This need to diversify foreign income is already addressed by organisations as Sounds Australia which has led trade missions to South America, and in April got $1.6 million from the federal government to help expand into Asian markets.

And music now stands alongside the powerhouses of Australian exports – food, agriculture, wine and tourism.

“But we are at a critical time for our industry, at a crossroad when the economic models that support music are shifting around the world,” he says.

“The opportunity now is to build on the work in the North America and European markets and to explore the full potential of Australian music exports and people-to-people links in the Asia-Pacific rim and South America.”

Australian music punches above its weight

Lead researcher and University of Newcastle conjoint Professor Richard Vella adds: “Australian music has always punched above its weight on an international stage.

“They can digitally release their music at the same time in multiple countries without always having to begin by promoting their work locally.

“This first-of-its-kind study unpacks the structures, support and international strategies Australia needs to have in place to ensure its artists are export ready.”

“There is substantial scope to support Australian artists who have shown that they are innovators, and where live performance remains a key component of global success.”