'USMCA is the most important deal we've ever made by far’
US President Donald Trump read more
Our new e-magazine is OUT NOW. Click here to read.
REGISTER ADVERTISE
SUBSCRIBE TO OUR FREE NEWSLETTER
PUBLISHED | MARCH 28, 2017
COMMENTS | NONE
Tweet 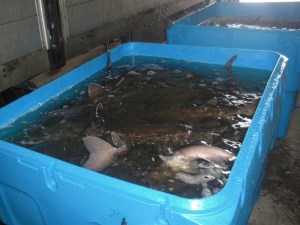 The Melbourne-based company has launched a new range of stainless steel oxygen diffusers which will extend shipping times and reduce costs for exporters.

Designed and manufactured in Australia, the new diffusers are being vertically integrated into the FishPac supply-chain around the globe.

“By introducing stainless steel to the diffuser system, we removed the constant issue of breakage, which plagues ceramic diffusers,” said John Curtain, FloatPac’s Managing Director, who worked on the sintered process with a local manufacturer for four years. “This reduces overall operating costs for shippers, whilst also reducing required oxygen flows thanks to the new design.”

Gavin Hodgins, FloatPac’s General Manager, said the new diffuser system works on a higher-pressure rating than what has previously been available.

“This removes back pressure from the system which has long been a frustration of FishPac clients worldwide, due to the low-pressure rating of ceramic stones.”

The new design almost completely eradicates backpressure, giving live seafood shippers greater control over oxygen flows, as well as extending the distance potential of the FishPac system due to lower operating oxygen flow rates. The ability to have a true flow rate excites the FishPac team.

“Thanks to the larger bubble, whilst not reducing dissolved oxygen, we are now breaking the surface tension of the water on all FishPac shipments, which means an even greater potential for next to no mortality of valuable live seafood,” said Mr Curtin.

“By combining proven pre-shipment handling and treatment techniques with the existing FishPac system, and now adding the new diffuser to the mix, FishPac is pushing the envelope of where live aquatic animals can be shipped from and to, while minimalizing mortalities to between 0-1%.”

The new diffusers are now deploying to various shippers worldwide, with testing continuing with a variety of seafood species to see this new technology adopted further around the world.

Since its launch two years ago FishPac systems have shipped over 300,000 bins of live seafood around the world.