‘UK wine exports are at their highest level in a decade’
Rachel Triggs, Wine Australia read more
Our new e-magazine is OUT NOW. Click here to read.
REGISTER ADVERTISE
SUBSCRIBE TO OUR FREE NEWSLETTER
PUBLISHED | JUNE 14, 2018
COMMENTS | NONE
Tweet

The first Australian tillage system built in Germany for the European market has been delivered to a farmer in Estonia.

Previously manufactured in the South Australian outback town of Booleroo Centre, Kelly Engineering has been selling its Australian made Diamond Harrow tillage machines in Europe for several years but has recently established a relationship with a contract manufacturer in Stolpen, Germany to meet demand.

An initial six German-built machines were completed last month with the first delivered to Estonia on May 19. The manufacture of a further four machines is underway.

Kelly Engineering, which still manufactures in Booleroo for the Australian market, has its products manufactured under contract in the United States where it has sold almost 2000 systems since 2010.

In Europe, the company has sold the Diamond Harrow in Estonia, Germany, Austria and the United Kingdom and is preparing for trials in Ukraine, Russia and Bulgaria later in the year.

Managing Director Shane Kelly said building the systems in Australia and shipping them half way around the world resulted in long lead times and other inefficiencies as volumes grew. 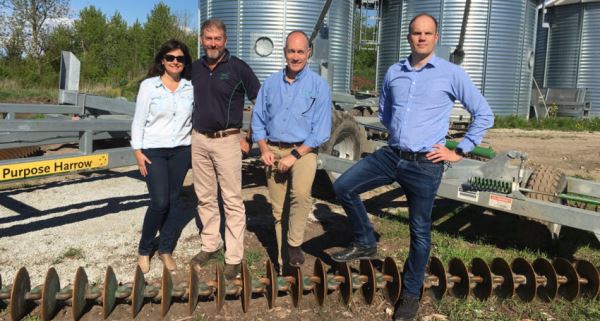 “So we revised the business model to source a supply chain locally while still running our IP and management out of Booleroo,” he said.

“For instance, the majority of what we sell in the US is now made there and we manage the supply chain from Australia.

“That model then is replicable for Europe because it’s a much lighter load on working capital and lead times.

“It works well over there because the machines have to be European specific models – the road transport width has to be under 3m and they have to have brakes and other things that aren’t required in other markets.”

The patented Diamond Harrow uses four chains lined up in a diamond formation to allow the machine to prepare the seedbed in rough fields.

Each chain is fitted with a crop-specific row of metal discs that rotate and penetrate the soil.

The design also allows the machine to work the soil, attack crop residue, manage weeds and initiate better microbial action in the soil by decomposing residue in the top layer, allowing access to more sunlight.

Shane said the systems could be configured for a variety of soil and crop types.

He said they had proven at reducing blackgrass infestations in the UK and corn borer numbers in Germany.

“We see a different mix and match from customers with heavy soils and big production in Germany or a lot of sandy-loams in Estonia and a range of different conditions,” Shane said.

“In Estonia there’s quite a bit of organic production and the disc chains have helped with their production.

“There’s not a universal reason for using them, they provide opportunities in a number of different challenges.”

Kelly Engineering has sold its tillage systems in more than 25 countries with the United States accounting for about 60 per cent of its orders.

Shane said having more machines on the ground in Europe would likely have a snowball on sales as more and more farmers gained firsthand exposure to the system.

“Farming is still a very conservative industry in a lot of places so people want to be confident, especially with a new, unusual looking product or a new concept like our Diamond Harrow,” he said.

“Typically we’ll sell one or two machines in a year and the next year it will be six and then exponential growth. It’s about a five-year lead in period and that’s been the case everywhere we go.”

Last month Kelly Engineering exhibited at NAMPO Harvest Day in Bothaville, South Africa. The company already has its Australian made systems in South Africa, Botswana, Zambia, Kenya, Uganda and Sudan and Shane said it was the next logical expansion target.

“There’s no one African market, there’s lots of small markets – and we’ll watch that space with the same process,” he said.

Collaboration with University of South Australia

“When volume reaches a certain point it will be logical to build locally and we will look for a partner over there but it will depend on the ability to find a quality partner and how our other three markets of Australia, the US and Europe are tracking.”

Kelly Engineering has recently collaborated with the University of South Australia on a product analyses project to improve the productivity and functionality of its tillage tools. It is also working with the University of Illinois on long-term field trials studying agronomic measurements such as soil carbon, weed control, compaction, fuel usage and yield results.

The engineering company is building an R&D facility at its Booleroo Centre headquarters in a bid to constantly improve its products and research new solutions.

“We recognise that supply chain, product development and market development are the key backbone for the business going forward,” Shane said.