Generation Global: Business for the Young 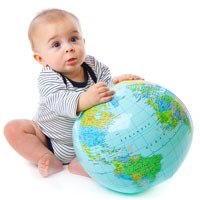 Generation Y seem to be born with a global mindset, but what does this entail for international business? Here's a future view of exportingfor Gen X, Y and Z. Nationally, one in four Australians were born overseas, a pretty multicultural figure if there ever was one. But take the under 30s demographic and the number is much closer to one in three, according to social researcher Mark McCrindle, CEO of McCrindle Research and author of The ABC of XYZ: Understanding the Global Generations. "With that multicultural mix, that cultural diversity, it means there are lots of connections throughout the world, so that's partly how there are global connections," he notes. "More than that though, they are studying and working alongside people who have come from other parts of the world, even if they don't have those connections. Most importantly, behaviourally-through technology-we're talking about a connected generation." Thanks to technology, this connectivity is part of the natural evolution of a global community pulling closer together as time goes on. "You end up with what we call cultural convergence; each new generation, regardless of cultural background, is closer to their generation than their fathers and grandfathers were [to their respective generations]," explains McCrindle. "That's the world shaping generations X and Y and Z. As for export and global business and connections, we've never had a global generation like this before." With this fresh outlook comes a lot of business benefits. For starters, Generation X (born 1965-1979), Y (1980-1994) and Z (1995-2009) have very little concept of national boundaries and will naturally look to do business internationally. "In the past we'd think about domestic and international trade, but the younger generation is less likely to see those distinctions. So rather than focus on a domestic business and when you get big enough, you'll move to export, this generation think globally from the start," says McCrindle. "They never see that their business needs to stop at a border." The fluidity of this mindset, which he calls post-structural thinking, gives businesses with a Gen Y employee at the helm the ability to move forward easily. "In areas of innovation they are able to morph with the times and engage in this fast-moving world," says McCrindle. "They are intuitive when it comes to technology. They bring strength in that entrepreneurial area as well, being able to think out of the box and find niches for what they're offering."

Barriers at the border

Unfortunately there are some downsides to young exporters' fluidity when it comes to the nitty-gritty of doing business, particularly in regard to bureaucracy. "We have a world of increasingly regulation and systemisation, and yet you have a generation that are less compliant than previous generations," says McCrindle. "So when you have a highly regulated business society and world, but a low compliance generation, you have a clash of values." Gen Y and Z see regulation as stifling innovation, and this attitude is likely to compromise future governance given that Gen X and Y will come into leadership positions over the next two decades. McCrindle believes they will question a lot of the existing rules, and the 'old ways', but will need to come around to systemisation. "It's going to require an attitudinal adjustment for Gen Ys," he says. "As creative as they want to be, they have to work within systems and be pragmatic about playing the game even though they want to change the rules. That's a bit of give and take on both sides. They'll find a path, they are resilient." Gen Y's way of working may also come into question, for while they are great advocates of work/life balance, flexibility and empowerment, as managers they'll need to compromise with systems designed to keep people accountable, as well as focus on productivity and defined job roles. Adds McCrindle: "Their weakness is that while they're good on the soft skills, inspiring people, casting a vision and on communicating and engaging, they aren't as good on the hard skills and we do need productivity outcomes, the structural administrative side as well."

All this is a fairly Western view of Gen Y and admittedly some of the countries with which this generation will interact will have strong ideas of business systems that are different, particularly with regard to hierarchy and authority. "Leaders going global need to understand that it's great to be empowering, to be collaborative and to offer flexibility and work/life balance, but in a lot of emerging countries they want clear leadership and instructive approaches and a strong supervisory system," explains McCrindle. "We'll need our leaders to have the flexibility to put on both hats." Fortunately, flexibility is a key strength of the next generation of global business leaders. Combined with their solid understanding of cultural differences, it opens up a world where cultural interactivity is all part and parcel of doing business, not just a guide to etiquette skimmed before meetings. "They're just as likely to learn from the east as they are from the west," says McCrindle. "It's an appropriate respect that they bring with the new shift in world power. It's exciting." Read more about Future Leaders in Export

Young ones to watch

Jodie Fried is the chief executive of Bholu, an ethical homewares design company based in Sydney. She took home the NSW Young Exporter Award in 2009. Garrick Harvison is the export manager for Yarraman Estate, an Australian winery with an established international reputation located in the Hunter Valley. He shared the 2009 NSW Young Exporter Award with Fried. Alex Vega is the founder of Elegre, championing quality food products such as cooking wine for commercial chefs, and premium antipasto. Elegre is the upmarket brand for his other business, All Service Food Associates, which already has clients in Australia and Asia. Jason Theuma is the founder and materials designer for Victorian marine supplier Glowfast Marine, which manufactures glow-in-the-dark safety and performance products. Glowfast products already appear on leading blue water racers internationally.

The future of export

Last year, the Australian Institute of Export launched its Future Leaders in Export (FLEx) Club in Victoria and will look to roll out the concept nationwide throughout 2010. FLEx is specially designed for the next generation of exporters and international business people to create a community with, and to share and leverage the experience of, potential, new and established exporters. AIEx state manager for Victoria Collins Rex spoke to FLEx member Bijan Asgari about his experience in the club. CR: Why did you join FLEx? BA: FLEx was, and still is, the only place for my professional networking with actual exporters, especially since it is free of charge for AIEx members. I joined FLEx to see if they are solely exporters, manufacturer-exporters and/or importer-exporters, to compare my knowledge with their proficiency, to find any opportunities, to pick their brains about their marketing areas and how to target their markets, which are completely new for me, and to find out what are their main concerns and how/which authorities respond to them. CR: Has FLEx helped you so far? BA: I am happy with my achievements in FLEx sessions while I have been updating my knowledge in a very friendly environment. Since FLEx sessions have been running particularly different subjects, I have refreshed my knowledge on the titles of each consulting sessions. It has expanded my awareness on a number of subjects: Branding: How to create a progressive but real business image, how to build a business brand in challenging exporting markets and how it can help to stretch my legs into new markets. Training courses: To be informed of available courses including online. Website design: What are the elements of a professional website: impression, credibility, time efficiency, simplicity, achievable strategy, etc. Also web security. CR: Will you continue to attend FLEx consultations? BA: I will be more than happy to be a member of FLEx in 2010. Also, I would like to express my sincere thanks to you for your efforts to gather a number of active exporters, official authorities and experts from a variety of sources to help new exporters to be more successful. Find out more about the FLEx club at www.aiex.com.au/programs/flex/flex