Why the world’s largest shipping company is testing blockchain 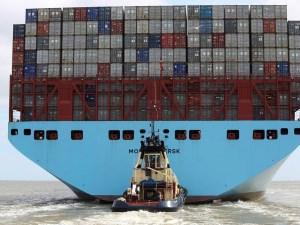 Maersk, the world’s largest shipping company, has completed the first test of a system that would manage the company’s cargos using blockchain, the distributed ledger technology behind Bitcoin.

The system, as reported by Coindesk, was built in a partnership between Maersk and IBM, and used the Hyperledger Fabric framework.

For those wondering what Bitcoin might have to do with ocean shipping, a quick catch-up is in order. While it’s most often talked about as a currency, Bitcoin is really more accurately described as a database or ledger that tracks transactions, hosted across many nodes and cryptographically guarded from fraud.

“Blockchain” is the generic term for the anti-fraud structure at the heart of Bitcoin and similar projects.

Using blockchain to manage freight tracking makes a lot of sense, because there are many parties and a lot of risk involved. In the test scenario, the shipper, Dutch customs, and US Homeland Security were all able to access and manage shipping data remotely.

In a full-scale implementation, blockchain security would allow for close management of such a distributed system, with digital “signatures” that would, according to Maersk, make it harder for anyone in the system to inaccurately label goods.

The system would also reduce the cost of paperwork, though Maersk hasn’t yet quantified potential savings.

That could be extremely important for shipping companies like Maersk in the near future, as a years-long down cycle in international shipping begins to look like a more permanent moderation of trade growth.