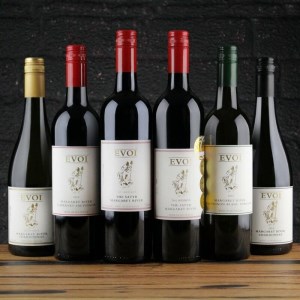 It’s hard to believe that a Chardonnay produced in a garage would earn the praise of respected wine critics. But that’s exactly what happened when Margaret River winemaker, Nigel Ludlow, launched Evoi Wines in 2007.

“I started by producing two barrels of Chardonnay in my garage, which got great reviews,” says Nigel. “From those two barrels, I doubled my volume each year. Then I did a Reserve Red, and then the business just kept growing until it became too big for my home – so I moved into a winery.”

It was a fast evolution for the winemaker.

“Even with just two barrels you still have to set up the winery and do all the legal stuff involved,” he says. “The last four years have been especially quick, with my volume going from 15 tonnes to 120 tonnes.”

Evoi is the Latin word describing the “scream of joy” emitted by followers of the Greek wine god, Bacchus – and the wine clearly lives up to its name. Despite being a micro winery, the Evoi range has attracted more than its fair share of awards and critical praise.

The company won the Western Australian Winery of the Year at the Melbourne International Wine Show 2015 and is now a 5 Red Star Halliday-rated winery – an honour bestowed on few by Australia’s most respected wine critic and writer, James Halliday.

A knock on the door

Nigel says that he always intended to export his wine – and he has been selling overseas since Day 1.

“A guy from the UK knocked on the door as he’d seen the Halliday review, and I started exporting through him,” Nigel says.

A lucky break perhaps – but Nigel stresses that exporting involves a great deal of hard work.

“None of it’s easy – brand recognition and getting your name out there has been the hardest step for me. Finding the right partner is also key. At the moment, I export about a fifth of what I produce, but my goal is to increase that to about a third.”

Nigel has branched out to some atypical markets – Jamaica, Norway and Hong Kong.

“In Norway, imports are government controlled – a panel chooses which wines are going to be accepted. They put out a submission and I entered my wine into a tasting – and one got accepted, which was great.”

From Australia to Jamaica

Nigel found out about Efic late one night while trawling the internet for grants finance. Being a small wine brand, his business didn’t have the equity needed to secure funding through traditional banks. What’s more, the wine export industry has a very long working capital cycle, so Nigel had a cashflow issue.

“I won a contract for an order of wine to Jamaica. But I won’t receive any cash until at least 14 weeks after the pallet arrives.”

Nigel applied for Efic’s Small Business Export Loan for $20,000 – the minimum amount – and was successful. With an online application and funds available in his bank in as little as nine business days, Efic’s loan was perfect for Nigel’s business when it needed fast access to boost its cashflow.

“It’s been great to be able to access to the loan to get over the waiting period,” he says. “The loan has meant that I’ve paid all the duties and fees – so it made it possible to ship my order.”

Despite the hard work and uncertainty involved, Nigel Ludlow loves what he does. His advice to other exporters?

“We’re in this game to make money, but if I didn’t enjoy it I’d give it up – so make sure you enjoy it!”