'USMCA is the most important deal we've ever made by far’
US President Donald Trump read more
Our new e-magazine is OUT NOW. Click here to read.
REGISTER ADVERTISE
SUBSCRIBE TO OUR FREE NEWSLETTER
PUBLISHED | OCTOBER 26, 2018
COMMENTS | NONE
Tweet

Harry and Meghan welcomed with Australian Made presents 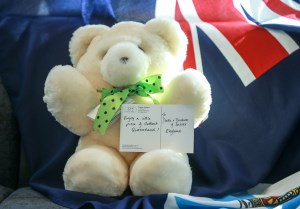 The Duke and Duchess of Sussex have been treated to a broad range of Australian Made gifts and produce during their recent visit – a priceless global promotion for locally-made products.

The young royals also received a plush Australian Made kangaroo, a quintessentially Australian icon offered as the inaugural gift to celebrate the announcement of their first child.

“We’re thrilled to see genuine Australian Made products are the gifts of choice to represent Australia on such a special occasion,” said Australian Made Chief Executive, Ben Lazzaro.

“Aussie products made to Australia’s high manufacturing standards are recognised all over the world and should be celebrated,” he said.

“Australian Made encourages shoppers to buy Australian Made gifts for all kinds of special occasions, from milestone events like royal welcomes to birthdays and national holidays.

“There’s something very personal about locally-made products that in turn support local industry.”

The Governor General was not the only one to choose Australian Made products for the royal visit.

Special gift for the birth of their first child

The Premier chose an Australian Made Tambo Teddy, to represent the state, presented to the royal couple on arrival at Fraser Island this week, a gift for their first child.

Tambo Teddies was established 25 years ago during a previous drought in order to help revive the textile industry in the township of Tambo by using quality wool produced in the outback to create jobs.

“Giving Harry and Meghan a Tambo Teddy was a reminder of the importance of Queensland’s fine wool industry and how much the western parts of Queensland have suffered too from years of unrelenting drought,” said Ms Palaszczuk.

“Tambo Teddies are also proof positive of the resilience of Queenslanders and how they overcome tough times backing themselves and an Australian made product.”

The royals return to Sydney today after a brief visit to Fiji and Tonga.

They will attend the Australian Geographic Society Awards and the final stage of the 2018 Invictus Games, an international event backed by Prince Harry to inspire recovery and rehabilitation of serving and veteran servicemen and women.

For an ABC interview at Kirribilli House, the Australian Made gift of choice given by Invictus Athletes and Australian Sportsman, ABC presenter Dylan Alcott was a pair of Australian Made Budgy Smugglers, which Prince Harry very graciously tried on.

“It's a pretty big deal to see our Budgys on Prince Harry. We're still very much a small company running from an apartment in Sydney, to see them so high up the pecking order and in the hands of royalty is pretty cool,” he said.

“He was a great sport about it. One of the athletes threw out the comment that he (Prince Harry) should try them on and he didn't hesitate, saying ‘it doesn't get much better than this, does it’".

Skincare brand Aromababy Natural Skincare even found its products in the hands of Meghan Markle, a gift given to her on the royal couple’s visit to South Melbourne Beach.

Speculation continues to grow around which Aussie Made gift will be presented to the royal couple next, during the remaining days of their visit down under.

Australian Made encourages shoppers to consider the importance of giving authentic Australian gifts that in turn give back to the local community, all year round by looking for products with the Australian Made logo.

The Australian Made Tambo Teddy presented to Harry and Meghan