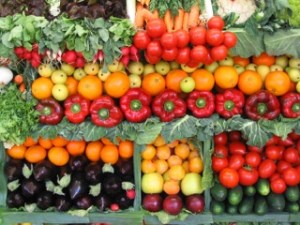 Australia should follow the United Kingdom’s lead and put in place a plan to source government-procured food from local suppliers and producers, says AUSVEG, the national peak industry body for Australian vegetable and potato growers.

British Prime Minister, David Cameron, announced recently that as of 2017, the UK central government will, where possible, buy fresh, locally sourced food, under a new Plan for Public Procurement.

“The UK has taken an important step by committing to procure goods from local sources, which will without doubt benefit thousands of farmers in the United Kingdom,” said AUSVEG Manager – Government and Parliamentary Relations, Andrew White.

“Australian vegetable growers and processors could potentially realise the same benefits if our governments followed suit and put in place its own plan and a local benefits test to source from local suppliers, he said.

“We believe there is more that could be done and getting better information about the current situation in regards to the existing level of local sourcing across all Commonwealth and State/Territory agencies would be a sensible place to start.”

A recent public inquiry examined the current rules for Australian goods and services procured by federal government departments and agencies and found that the rules should take into account the impact of the government’s procurement decisions on communities and on the broader economy.

The investigating committee recommended that the Department of Finance develop a test to provide a greater level of understanding regarding the quantity of Australian goods and services currently procured by the federal government.

The committee expressed concern that an ABN is not a good indication of whether goods are manufactured in Australia.

“With the inquiry acknowledging that there is scope for greater sourcing of local goods and services by the government, it is important that Australian producers are recognised when it comes to future food procurement standards set by the Commonwealth,” said Mr White.

“Government procurement of Australian-grown vegetables could provide a significant boost for the industry, particularly in the vegetable processing sector, he said.

“However, we need a balanced procurement policy that ensures Australian taxpayers receive the best value for money, while supporting local farmers and fully appreciating the wider domestic economic benefits that will result from sourcing food locally.”

Support from Australian Made Campaign

The Australian Made Campaign called for Government to improve local procurement procedures in a submission to Senate Finance and Public Administration References Committee Inquiry into Commonwealth Procurement Procedures earlier this year.

“Government procurement is an important source of demand in the domestic marketplace, and wherever possible, decisions about Government expenditure should take into account all the costs and benefits associated with the purchase decision, Mr Harrison said.

“For example, Government procurement should, wherever possible, be seen as an investment by the community in the future capacity and competitiveness of industry in Australia.

“Government must take a long-term approach to procurement, taking into account ‘whole of life’ costs for the products purchased, rather than the upfront cost alone. Such an approach would take into consideration the availability and cost of maintenance and support, conformity with quality standards and the spill-over economic and social benefits associated with local farming and manufacturing.”