World Bank and IMF warn of roadblocks to economic recovery 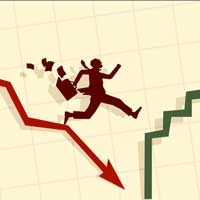 As the annual meeting of the World Bank and International Monetary Fund (IMF) drew to a close on the weekend, the mood among global finance chiefs was grim. Economic leaders warned global economic recovery balances on a knife’s edge in the face of rising food prices, turmoil in the Middle East and weak finances in "systemically important" countries. "We may be coming out of one crisis-the financial and economic crisis-but we are facing new risks and wrenching challenges," said World Bank President Robert Zoellick. The impacts of surging food prices on political stability in developing countries cannot be underestimated, Zoellick stressed. "We are one shock away from a full-blown crisis. The financial crisis taught us that prevention is better than cure. We cannot afford to forget that lesson." The World Bank also warned worsening conditions in the Middle East and North Africa could easily "derail" global growth. "If oil prices were to rise sharply and durably-either because of increased uncertainty or due to a significant disruption to oil supply-global growth could slow by between 0.3 and 1.2 percentage points in 2011 and 2012, respectively." IMF managing director Dominique Strauss-Kahn concurred, saying that good figures at the growth level did not mean the growth was sustainable, "just because of the political problems behind it." He added the IMF stood ready to offer technical and financial assistance to struggling economies. Strauss-Kahn said advanced economies still posted alarming levels of joblessness and "a lot of repair is still needed" in the finance sectors of developed countries. He warned emerging economies were at risk of overheating as growth sped up, driving inflation and an exponential rise in the basic costs of living. "Growth is not enough, because the old pattern, following which if you had growth, the rest would follow, doesn’t work any more," he said. Tharman Shanmugaratnam, chairman of the IMF’s monetary and financial committee, said there was a sense around the table that the world was still in a fairly fragile situation following the 2008 Global Financial Crisis. "We have to be extremely watchful, but we also need to develop the capabilities ... to anticipate scenarios that could turn out to be ugly, and require that countries, including especially systemically significant countries take actions early to prevent another crisis."

On the sidelines of the World Bank-IMF meetings, a group of 20 finance chiefs from advanced and emerging economies met to discuss global concerns including Europe’s high debt levels, the USA’s gaping budget deficit and China’s huge trade surplus and undervalued currency. Yi Gang, deputy governor of the People’s Bank of China used the opportunity to take a swipe at the US, saying "systemically important countries need more rigorous fiscal consolidation targets due to their tremendous spillover effects." The group wrote a set of "indicative guidelines" to identify when countries had a trade imbalance significant enough to endanger the world economy. While not named, seven members currently fit into this category, including the United States, Britain, Germany, France, Japan, China and India. French Finance Minister Christine Lagarde, who chaired the 'Group of 20' meeting, said the world needed to band together to provide strong support for North African countries in transition to democracy. "The economies of these countries are facing specific structural problems." Lagarde said it was up to leading economies and institutions including the World Bank and IMF to approach political, economic and security issues as a whole. "If priority is to be accorded to inclusive and sustainable growth, issues of justice, security and employment, particularly in the private sector, can no longer be addressed separately."