‘UK wine exports are at their highest level in a decade’
Rachel Triggs, Wine Australia read more
Our new e-magazine is OUT NOW. Click here to read.
REGISTER ADVERTISE
SUBSCRIBE TO OUR FREE NEWSLETTER
PUBLISHED | AUGUST 12, 2009
COMMENTS | NONE
Tweet 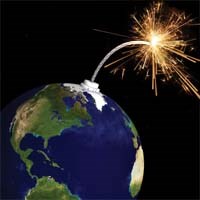 The Encarta Dictionary defines sectarian as ‘rigidly adhering to a set of doctrines and intolerant of other views’. This definition could best describe the mindset of violent religious and ethnic groups in emerging economies. For most individuals, it can be hard to comprehend why a group of individuals could take it upon themselves to unleash wanton destruction of human lives and properties in a quest to actualise religious or political objectives. In Indonesia, terror groups have taken to suicide bombings targeted at Westerners in that country because of their belief that Western powers are at war with Islam in Afghanistan, Palestine and Iraq. In India, there has been spate of bomb attacks and hotel shootings across major cities; the Southern Thais are still having an on-and-off battle with the Thai Government in their quest for self-determination, while the Uighurs recently had violent run-ins with Chinese authorities. Recently, an Islamic sect in Nigeria took on the law enforcement agency in that country in a failed bid to impose Sharia law in a country populated evenly by Christians and Muslims.

One may ask why violence is the preferred option for sectarian groups against other legitimate alternatives readily available. Here's an insight into the recent sectarian crisis in Nigeria, which was orchestrated by the 'Boko Haram' sect in parts of northern Nigeria. The sect launched an attack in Bauchi on a police station with the motive of securing more arms to eradicate perceived Western influences in Nigeria, and replace same with Sharia law. The group attacked security agencies, churches, Christians and Muslims in their bid to reverse the Nigerian Constitution and impose Sharia law across the country. Information made available by the Nigerian President in a nationwide broadcast indicated that the sect has been in existence for more than two years and had been stock-piling arms and ammunition, including bomb-making materials for quite sometime. Despite this knowledge held by Nigeria security operatives, it took an attack on a police station for the government to clamp down heavily on the sect members. Former Nigerian President Chief Obasanjo was in power when the sect started and could have nipped the insurgents in the bud. The former President simply ignored the sect because of concerns that religious zealots could brand any action by a Christian President against the group as an attack on Islam. Current President of Nigeria Mallam Umaru Yar’ Dua is a Muslim; he responded as soon as the violence erupted and ordered military action against the sect, which may have permanently quelled the flaming ambition for violent constitutional change. The suspected financier of the renegade Islamic group, a former State Government Commissioner, claimed the sect's version of Islam is superior to others and that Western values and education are haram (forbidden). Interestingly, the leaders of the sect drove around in SUVs and coordinated their attacks through GSM mobile phones, all part of the Western influences against which they are fighting. This confirms the often ignored disconnect between ideological beliefs of sectarian groups and realities of the 21st century that confront them daily. The governors of northern states in Nigeria have resolved to monitor the activities of all religious groups in the region to forestall recurrence of unrest. The northern Governors joined with Nigeria's Immigration Department to become more vigilant about the influx of foreign nationals into the northern states with the aim of propelling the activities of militant Islamic groups. Leaders across Nigeria have observed that the security of lives and property remains a primary constitutional responsibility of government and challenged political leaders at various levels to come out of religious sentiments and provide citizens with the dividends of democracy, which includes principles of good governance, employment opportunities, power, good roads, qualitative education and transparent electoral system.

Lack of these basic amenities in developing nations is what propels self-destruction; these unfortunate conditions makes exploitation of less-privileged youth by wealthy and fanatical few in emerging economies a recurring tragedy. Travellers to cities or countries prone to sectarian violence should endeavour to seek informed advice from the Department of Foreign Affairs or the High Commission of the destination in Australia. It is important to know the sectarian group key targets and avoid such places or individuals as much as possible. Having credible intelligence could make the difference between life and death in a foreign land. -Frank Aneke is the principal of OctoberFirst Consulting, an investment communication firm specialising in business opportunities in Africa. OctoberFirst is a member of the NSW Business Chamber.