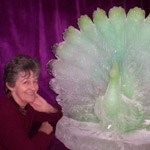 "I am 71 but I feel the same as I did when I was 20," says Vivienne Lipke, CEO and co-founder of Queensland’s Icecraft International. Icecraft is a 2010 Australian Export Hero that sells ice sculpture moulds in 117 countries around the world. Lipke works a 19-hour day and has only started using an answering machine between midnight and 5am because her kids insisted on it. "I always start by 5am otherwise I’d miss my Americans, who will be going home in the next hour or two, then right across the world and into the Middle East in the afternoon, then into Europe and the UK until late at night, and you must work with their hours or you just couldn’t operate." Personalised customer service is what Lipke, who takes care of marketing for the family run company, believes is the key to Icecraft’s success. That and mould making technology that took five years to develop and so far has not been successfully replicated. Lipke’s husband Cec ploughed everything he and Viv had made in 28 years of running their own businesses into buying the 10 acres of land for the mould making plant. Using trial and error he created rubber moulds in fibreglass casing that allow for expansion as the ice freezes without developing fractures in weight bearing areas like swan’s necks, cherub’s wings, polar bear paws or dragon’s tails. "There are about six features in our moulds that guarantee that will never happen," Lipke asserts, and numerous testamonials on Icecraft’s website back her up. But 23 years ago, before the internet, prospective customers had to make a leap of faith when ordering the moulds sight unseen and paying for them upfront. "It was just long hours and responding to every single inquiry and really looking after them," she says. "We called them in their hours, explained it thoroughly and got their confidence." More than that, Lipke is the mistress of putting together a deal that appeals, especially in these tough times post GFC and with the rising dollar. "You have to know the answer to every question about every design, from any country to different end users. When it comes to closing a sale it all depends on the bottom line and how much you can give them, how much the freight costs, how long it will take. It’s very complex."

When the Lipkes launched Cec’s invention as an alternative for caterers to handcarved ice sculptures it generated enough local interest to get coverage on television and create local demand. Soon they were getting inquiries from overseas so they started advertising in the classified sections of some international catering magazines. The United States market was one of their earliest and now accounts for 95 percent of Icecraft’s business. It wasn’t all smooth sailing. "It cost a six figure sum to put the patents in place when really we should have spent that money on advertising. That was a lesson learned," Lipke says philosophically. In spite of their unique product, there were other challenges to contend with. Although Icecraft sells to 59 hotel chains this spread has not been generated by word of mouth. Chefs are a secretive lot when it comes to trade secrets. "We sold to almost every Sheraton in Australia but none of them had heard from another. We’re very grateful that chefs do move around the world, so gradually the word does get out, but in the beginning I think that it was just our advertisements and the fact that the moulds are totally reusable and we kept diversifying, but thinking back I have no idea how we developed as far as we did before computers," she says.

Nor did they approach the hotel chains to drum up business. "That means we weren’t very good marketers," Lipke admits, "but we were pretty busy expanding the factory." With a business model that relies on constantly finding new buyers for its reusable moulds, Icecraft’s only means for generating repeat custom is its ever expanding range of 150 designs. "Every time we produced a new design you have to allow 10 or 20 turnstiles for that, so we stretched and stretched the factory and didn’t go chasing business a lot," she says. The factory has also been kept busy with custom jobs, making logos for hotels, corporates and the armed forces, including Canadian and US navies and recently the American embassy in Baghdad.

Although Icecraft now employs a translator based in Europe and a number of agents, Lipke says the moulds are not an easy product for agencies to handle. "Most of our sales are made direct, it’s a niche market and the fact the moulds can’t be made or sold cheaply has to be explained. Usually an agent will say, ‘I’ll find the lead and you do the rest’ because they would rather have a smaller percentage of any sale than a bigger percentage of no sale, but it’s not for lack of interest." Lipke knows this because she has taken the moulds to trade shows in every continent, which she says have worked to gain exposure for Icecraft but are "a big job. People say that would be fun, going overseas but it’s not when you’re hitting the airport in the early hours of the morning. You have to prearrange getting the ice made at the other end with someone new, do 12 hours a day on the stand and all night back at the hotel room because it’s daytime in Australia, flying in the night before and flying out the last night of the show. Really hard work". Distributing the moulds to so many countries and dealing with multiple currencies and customs regulations is mindboggling, she says. "We’ve got about six ways of sending our product and the price depends on where it’s going, by what method, whether it’s being couriered from door to door, whether it’s a big shipment going to the airport. We can use Express Post International up to 20 kilos, we can send with our freight forwarder who chooses an airline on the day and then we have to quote to clear it at the airport for the end user’s own delivery or they pick it up, and then there’s sea freight." The pack down also affects the final price, since smaller moulds can be packed inside larger ones, and it’s these negotiations that enable Lipke to close a deal, despite the rising dollar. "We don’t want to manufacture overseas, we could have started doing that long ago if it was an option we wanted to look at, but even if we did, cheap labour wouldn’t work because each person in the factory is skilled." Franchising is another route Lipke says she never considered taking. "People say you’ve invented something new and fantastic and you could have sold it off in New York and London and other areas everywhere. But whether I was right or wrong I was already at the age and stage where I didn’t want to deal with the politics of franchising." Instead she encourages enterprises based on buying the moulds to start a sculpture supply business. "All they need is the freezer space, some moulds and a vehicle. The hotels love having the ice already supplied because they can buy it at a lesser price than handcarving and they’re still getting quality, so it’s a win for us, a win for the business operator and a win for the end user." Lipke runs the business with her son and with help from her daughter, but the partnership with her inventor husband who died waiting for a heart transplant 15 years ago continues in spirit. "While he was in intensive care I ran the business from the hospital with an international phone card," she explains. "He said to me when he knew he probably wouldn’t be coming out, ‘Love, you know it all, just follow my rules’," which, she confesses, "I don’t to the nth degree, because I’m more conservative!"