‘UK wine exports are at their highest level in a decade’
Rachel Triggs, Wine Australia read more
Our new e-magazine is OUT NOW. Click here to read.
REGISTER ADVERTISE
SUBSCRIBE TO OUR FREE NEWSLETTER
PUBLISHED | OCTOBER 6, 2009
COMMENTS | NONE
Tweet 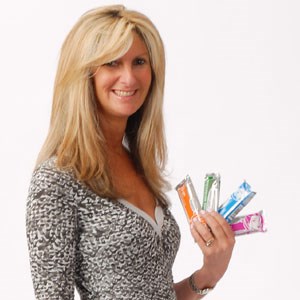 Wellness and weight loss coach, Sharon Thurin has taken her healthy snack food business, Slim Secrets from a well-known national brand in its niche to international markets. Sharon Thurin talks about Slim Secrets’ exportjourney and what lies ahead. Imagine a choc-chip cookie that’s nutritionally balanced but maintains the same decadent taste as its full fat competitors, or guilt-free salt and vinegar chips with only 140 calories. Sharon Thurin of Slim Secrets dared to dream. The concept of Slim Secrets came to Thurin one sleepless night in 2005, when she realised there was a gap in the market when it came to health and wellbeing for women in particular. Slim Secrets was born with its first flavoured snack bars and over four years it expanded into an entire healthy snack food range. From her Melbourne base, Thurin achieved national distribution in leading supermarkets and in 2006 she turned her sights globally. Slim Secrets now exports to markets including New Zealand, China, Canada, Singapore and Malaysia.

Thurin admits exporting was not something she initially planned to enter. "Someone from New Zealand approached us," she says, "and it seemed like a good idea at the time." Thurin took advantage of the opportunity and began exporting to her first markets in New Zealand and Singapore. "The language issue was easy to deal with and proximity made a difference too," she explains. As in Australia, Thurin found Slim Secrets was able to fill a gap in the overseas markets. Thurin soon became determined to make Slim Secrets an international brand. "The more countries we can get it into, the more recognised globally we can get and build up the brand," she says. Slim Secrets broke into the Japanese market this August with the help of Austrade, which previously assisted Thurin find distributors in Singapore. In Japan, language barriers became more evident, however this was lessened with the assistance of Thurin’s distributors. "Our distributors put stickers on the products and put out marketing flyers in Japanese [so] language hasn’t been an issue," says Thurin. Thurin insists the relationships fostered between herself and her overseas distributors plays a vital role in Slim Secrets’ success. "The distributors have taken on the brand I work with and are passionate about the product." However, Slim Secrets has also encountered challenges in the export market. The need for bi-lingual packaging in Canada initially caused problems, and issues have arisen since entering the US market this August. "We haven’t got US compliance packaging yet, so our products are sitting with distributors, but the FDA haven’t released them yet," says Thurin. Quarantine is also a challenge in any market. Thurin encountered a barrage of quarantine questions, from Japan and Singapore in particular, regarding ingredients. "It took weeks to go through every single question, my manufacturers hadn’t experienced anything like it," says Thurin. "One of our bars has primrose seeds and you’re not allowed to import primrose seeds into Singapore." Thurin decided to exclude specific products from export that contained ingredients not allowed into particular markets. Otherwise, the entire range of products is exported internationally.

Thurin attributes the distribution channels Slim Secrets has achieved through exporting as one of her greatest successes. Slim Secrets has entered national and international supermarkets, 7-Eleven stores in Canada and Boost Juice bars in Singapore and Malaysia. Some of the products also have Halal accreditation, which assists Slim Secrets’ popularity, especially in the Malaysian market. Another achievement was the exposure Slim Secrets received in Hollywood. "Having the bars at the Oscars and Emmys was great from a PR perspective," explains Thurin, who exhibited Slim Secrets at the 2008 gift bag marquees, where celebrities including the stars of Desperate Housewives and Days of our Lives snacked on the products. Slim Secrets’ success also lies in its competitive difference. Thurin believes packaging is a key feature. With slogans like ‘We only strip the fat’ and ‘chiptease your tastebuds’ on a bag of crisps, Thurin intends for the product to be seriously nutritionally balanced yet playful. "It’s the way we communicate to the consumer, she says. "Unlike other health products, our packaging is funky and not serious." Unlike many diet shakes or meal replacements, Slim Secrets’ healthy snack foods help control snack attacks, satisfy hunger and achieve weight goals all while retaining a delicious taste. "If it doesn’t taste any good, people aren’t going to buy them, even if they have a great nutritional profile," says Thurin. "But in our case they taste good!" Even in the current economic climate business has never looked better, she says. "We’re in our infancy and there’s so much growth potential. Dieting and nutrition are areas growing globally." Thurin is continually looking to the future and eyeing new products and growth prospects. "We have interests in Bahrain and UK health food chain Holland and Barrett are also interested," she says. She also working to enhance their presence in America and with the University of California potentially selling Slim Secrets on their campuses, it’s no secret the future is looking bright.