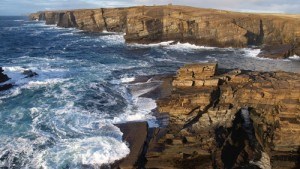 Scotland is today leading the way in the development of wind and marine power, despite the fact that it is best known as an oil and gas hub. Blessed with abundant natural resources, Scotland has the potential to generate 25 percent of Europe's wind and tidal power, and already produces approximately 60 percent of the UK’s onshore wind installed capacity. Scotland’s energy sector is incredibly dynamic in terms of innovation, development and diversification, and the technology and expertise developed in the oil and gas industries have served the country well in making the shift to renewable energy. The Scottish Government has set the most ambitious renewable energy targets in Europe, hoping to create 50 percent of Scotland’s electricity through renewable sources by 2020. Australian targets are currently much lower, with legislation now in place to ensure that 20 percent of Australia’s electricity comes from renewable energy sources within the same time frame. Australia, with its vast continental land mass, is rich in natural resources and many forms of renewable energy including solar, wind, geothermal, wave and tidal, bioenergy and biofuels. There are a number of opportunities for Australian and Scottish companies to access industry-leading expertise and share knowledge resources. With both a resilient economy and proximity to the fastest growing region in the world, Australia’s clean energy sector is poised for growth, and there are several lessons we can learn by looking to our Scottish cousins.

Oil and gas remain the cornerstones of the Scottish energy industry. Decades spent recovering oil and gas from the North Sea have enabled Scotland to develop vital expertise. Scottish waters contain the largest oil resources in the European Union and Scotland itself is the European Union's largest petroleum producer. As a result, the country boasts a proud history of technology and service innovation in the sector and expertise in project management, education and training, health and safety, production optimisation and asset management, and integrity. While Scotland’s oil and gas industry continues to flourish, the knowledge and capabilities developed have proven valuable in diversifying to renewable energy. Scotland’s skills and experience in offshore oil and gas operations have proven effective in its offshore marine sector. Similarly, skills in engineering and the manufacturing of large steel structures have become easily transferable to the wind sector. Some of the world’s largest energy companies have identified Scotland as an attractive place to invest due to Scotland’s favourable energy resources, extensive skills base, renowned academic sector, and positive business environment.

The renewable energy industry is characterised by the same qualities of vision and innovation that define the Scottish oil and gas sector, with Scotland recognised as a world leader in deep water offshore and onshore wind energy and tidal and wave power. Wind energy: The country leads the world in the development of deep water offshore wind farms, recently deploying two of the largest capacity turbines ever constructed. The planned UK development of over 30GW of offshore wind over the next 10 years will provide huge opportunities for business across a wide range of activities. Wind energy is a growth market in Australia, and companies are in a great position to take advantage of key learnings from Scotland’s expertise in this area. Australia has some of the best wind resources in the world, yet wind energy accounts for less than 0.4 percent of electricity generated for public use. With a significantly larger landmass, and strong winds, there is no shortage of land on the Australian continent suitable for wind farm technology installations. Scotland’s deepwater offshore wind capabilities draw on more than 40 years experience in deep water offshore oil and gas drilling. Like Scotland, Australia has significant capabilities in oil and gas production that could be adapted to further develop its wind energy sector. Marine energy: Scotland provides 25 percent of Europe's tidal energy and 10 percent of Europe’s wave resource. Wave heights in Scottish waters are some of the best in Europe, with only Ireland and Norway sharing a similar position. The European Marine Energy Centre, located in Orkney, Scotland, is a full-scale testing, accreditation and development centre for wave and tidal devices. Marine energy experts from around the world come to Scotland to test new technologies, putting Scotland at the cutting edge of device technology in marine energy. In Australia, the source for wave and tidal energy is inexhaustible and abundant, with the Southern Ocean being one of the world’s largest and most consistent wave energy resources. Research by the Federal Government and wave energy developer Carnegie Corporation reveals that wave energy resources could generate 35 percent of the country’s base power needs. Regions such as Port MacDonnell in South Australia, Portland, Warrnambool and Philip Island in Victoria, Albany and Geraldton in Western Australia and parts of the Tasmanian and New South Wales coastlines are optimal sites for wave energy plants. Listed on the Australian Stock Exchange, Neptune Marine Services is one example of an Australian company that is building its presence in Scotland’s energy sector. Headquartered in Perth, Western Australia, Neptune Marine Services provides engineering solutions to the oil and gas, marine and renewable energy industries, and employs more than 500 people internationally, including 100 employees in Scotland.

Through its international economic development agency, Scottish Development International, the Scottish Government also offers a range of incentives for Australian companies looking to develop energy technology in Scotland; for further information, visit www.sdi.co.uk. In addition, there are a number of opportunities for partnerships between Scottish and Australian businesses operating in the sector. -Iain Steele is the country manager of Scottish Development International in Australia and sits on the NSW Council of the Australian British Chamber of Commerce.