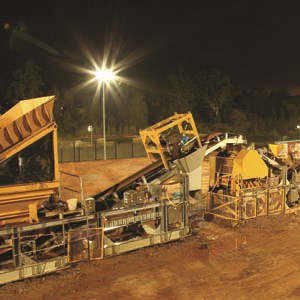 Much news has been generated on the performance of Australia's commodities in the global market, but much less is mentioned about the businesses that make it all happen: the mining technology, equipment and services (MTS) sector that help those mining companies get product out of the ground and onto ships and around the world in the most efficient way possible. Mining may be underground but mining technology, equipment and services are all around. Find out how your business can benefit from Australia’s reputation as a world leader in mining innovation. The MTS sector covers everything from software to processing equipment, surveying tools to safety training-anything to do with mining that isn't about selling what's dug out of the ground. Another attribute to note is that while mining companies tend to be multinational giants, the MTS sector is populated by small and medium businesses supplying to the industry.

Although a young country, Australia has a long mining heritage. For new exporters, it means that Australia is a world leader in the MTS sector and that's a reputation that will stand businesses in good stead around the world. "The MTS sector offers Australia the greatest opportunity for world leadership," says Elizabeth Lewis-Gray, CEO of mining equipment company Gekko Systems. "The beauty of it is that it's a value-added segment that is based on a domestic economy that is significant in world terms. It's one of the very few areas where Australia really has a competitive advantage." With commodities making up a great deal of our trade balance sheet, it's no surprise that the government takes the industry seriously, with funding for research and development readily available in the space. "Not only that, we have one of the largest research bases in the world for the mining sector through the CSIRO, universities, the CRC [Cooperative Research Centre]," says Lewis-Gray. One of the easiest ways to start exporting in this sector is to have a multinational customer take you overseas. This happens with both Australian mining companies with global operations as well as international companies operating here, as Robert Trzebski, executive officer of MTS export organisation Austmine, explains. "It happens quite often. One example would be one of the biggest mining operations in the world, Vale, the Brazilian giant. One of our members, Banlaw, manufactures quick refuelling nozzles for big trucks. They have an arrangement with Vale for Vale’s operations in and out of Brazil. Wherever they go, Banlaw goes with them," he says. It is also possible to find business through complementary service sectors, he adds: "There’s also piggybacking with engineering companies. Quite often you work in consortiums so you can deliver a package to someone."

MTS businesses already exporting should keep an eye on trends. Due to the current economic crisis, the need for cheaper, more efficient ways of operating a mine has become more visible, hence Trzebski sees 'smart mining' becoming the way of the future for the industry. "Smart mining gives the opportunity for innovation. It’s all about being efficient, profitable, safe and having good infrastructure," he says. "It’s a good opportunity for the global MTS sector to provide solutions to how we can save labour and be more efficient, in terms of fuel and the environment, and how we can progress automation." The best thing about MTS is that even if projects have stalled due to lack of funding, mining companies will still look to the MTS sector to provide cost-saving efficiencies. Trzebski also says that if you've appointed an agent or distributor in a market and it's doing well, consider setting up operations in that country. You may even be able to leverage a relationship with a company already there by adopting a corner of their office to prospect before branching out on your own. "If there’s no competition, if they are symbiotic, they share resources," notes Trzebski.

Mining companies are well known as pioneers for other industries so it follows that the MTS sector in particular should acknowledge emerging markets and prepare to follow mining companies into new areas. There are a number of countries earmarked for future development-many of them low competition, but high risk. "You have to look at other opportunities in places that you would not normally think about, places that are less prominent: Kazakhstan, Uzbekistan, Mongolia," says Trzebski. "Those countries are less competitive but provide more value because you have space to grow. They’re not easy markets." He also says Africa presents opportunities as well as challenges: "Africa is a tremendously risky region to go to but there are extremely good prospects there. Mozambique, Tanzania, Ghana: these are places where there are tremendous opportunities." And the next hotspot in Asia will be Laos and the central part of the continent, he believes: "As far as Australia is concerned, that has been an area very little explored."

"There are a lot of Australian companies with mining projects around the world. The mining companies lead the way for Australian service providers," says Stephen Deady, director of Industry Economics & Taxation at the Minerals Council of Australia. He believes the mining industry can provide a path for exporters in construction and engineering as well as law, accounting and financial services: "They are the associated industries that go with a major mining project." Trzebski agrees. "The mining industry is always pioneering. There are tremendous opportunities in education, project management, banking systems, infrastructure," he says. This goes all the way down to safety training: "Many of the bigger mines are being operated by big international players and they have governance within the company to ensure safety."

One prominent challenge for the mining sector in general is the fluctuation in commodity prices and tight financial conditions, which may affect investment, says Deady. But the other key issue is location, as mines are generally situated in remote areas of developing countries that may be exposed to high security risks. Another big one is political risk. "For the investor, issues around sovereign risk and predictability of public policy are critical in any major decision about investment," says Deady, but adds that service providers might not have the same level of concern. Trzebski admits that security could be a problem, also noting "the secure ones are more competitive". He advises exporters to thoroughly research the destination market and find the right people via export organisations such as Austrade and Austmine. "Research the market, go to the market. Before you commit resources, go there often so you can minimise the risk. Things can change with time," he says. Exporters can also attain coverage through institutions such as the Export Finance and Insurance Corporation (EFIC). "If it’s a risky country you have to think about whether you can afford to lose," Trzebski says. "Finance is always a challenge, but EFIC are a very good partner for companies to take up some of the risk."

Global recession shouldn't affect the MTS sector for too much longer, says Trzebski. "The crisis has not been caused by demand, it has been caused by financial traders so we believe the mining sector will recover first. Many projects are coming back into operation and there is focus on spending on those projects, so there’s an opportunity for the MTS sector." One issue the mining sector will keep an eye on will be the openness of the market. Deady nominates maintaining open markets as the most critical aspect of the current economic conditions. "We’re in a downturn and things are difficult," he says. "We have to make sure that governments don’t make it more difficult by increasing protectionist measures and closing off markets. It’s about keeping markets open for trade and investment." As for the future beyond the recession, Trzebski is upbeat. "It’s the age of mining technology. This is an opportunity to revise your technology or product and adapt it to new requirements. It’s about being more efficient, saving money," he explains."There’s a boom coming but it will be different, it will be more about how you can mine smartly. The Australian MTS industry is world-leading and it has a great future in Australia and as a global industry. There are going to be more opportunities for the Australian MTS sector outside Australia than in Australia."

Observing the expense and difficulty inherent in the gravity separation processing sector of the mining equipment industry, founder of Gekko Systems Sandy Gray thought he could develop a more affordable, more robust machine to do the work. After securing research funding, Gray invented a device that hit those marks-but found it took more than a great product to succeed. "We had some really excellent research results but the mining companies, understandably, were reticent about buying equipment from what was effectively a mum and dad operation," says Elizabeth Lewis-Gray, CEO and managing director of Gekko Systems. So the two-person operation became more professional in their approach, attending international conferences-which Lewis-Gray says "bring better business" than trade shows-and coming to realise that a great product was only part of the business. "The product is probably 10 or 15 percent of what it needs to make it work, the rest is about relationship management, about training," she explains. "It's a much bigger offering you need to make to be successful." And sales did not necessarily mean success. Lewis-Gray says if she had her time again she'd pay more attention to selling to the right people rather than just racking up revenue. "As a small company you're desperate to keep the cash flow going so if someone wants one, you sell it to them. What happens is the application's not right and the gear doesn't work and then it becomes a burden on your brand," she notes. Gekko have since taken a targeted approach to finding customers. Their equipment is best suited to hard rock mining rather than alluvial mining, and they've also identified customers with whom they're best matched. "We were primarily focused in the gold market so we had to see where production was," says Lewis-Gray. "Since then we've segmented our market in a really detailed way; we're better off selling to mid-tier companies rather than big companies because we don't have the capacity to service them." Their first export was to Spain and now they sell to 45 countries in key areas such as Africa, South America and Asia, though they're yet to crack the Chinese market. "That's flagged for the future," she says.