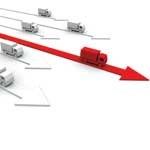 Before you enter into an agreement about how you are going to deliver goods to an overseas buyer, make sure the terms are appropriate for your situation. Terms for delivering freight are covered by guidelines first formalised by the International Chamber of Commerce in 1936 and called incoterms (short for international commercial terms). Many of these were based on expressions used since the 1800s, with the result that some of them are out of date and no longer legally meaningful. For example, did you know that ‘free on board’ (FOB) is an expression that refers to cargo carried loose, on men’s shoulders and backs, across the rail of a sailing ship? What it doesn’t refer to is containerised transport, even by sea, and what it means is that the buyer is responsible for the goods up until they are onboard ship. Incoterms themselves are not legally binding but they become so when they are used in a contract of sale where they are used to specify at what point the responsibility for the goods transfers from the seller to the buyer. Since incoterms define the limits of the seller’s responsibility, and the costs involved, it’s important to use them correctly when brokering a contract that covers delivery of the goods. "Ninety-nine point nine percent of people haven’t got a clue about incoterms and don’t even know there is any sort of written definition of those terms," says Bob Ronai, director of Import-Export Services, NSW and member of the ICC’s incoterms advisory committee. "They just take a punt and use a term because somebody told them that’s the one to use." Ronai attended the launch of the updated Incoterms 2010 held in Paris on 27 September, along with delegates from 49 other countries. The updated terms come into effect from 1 January 2011, with some of the old terms disappearing and others melded into a single more appropriate term. Ronai believes this is long overdue. "When containers came into use in international freight in the late sixties it changed the whole concept, but everybody is still using outdated terms," he says.

Incoterms can be divided into four groups: E terms which cover departure, F terms where the main carrying is not paid by the seller, C terms where the main carrying is paid by the seller and D terms which relate to delivery. EXW stands for ex works and is only really appropriate for intra country or trading block freight. FCA (free carrier), FAS (free alongside ship) and FOB (free on board) define where the seller’s responsibilities end in the seller’s country. CFR (cost and freight), CIF (cost insurance freight), CPT (carriage paid) and CIP (carriage insurance paid to) refer to the limit of the seller’s financial liability for transport to destination. DAF (delivered at frontier), DES (delivered ex ship), DEQ (delivered ex quay), DDU (delivered duty unpaid) and DDP (delivered duty paid) are where the seller is financially liable for risk and transport to the destined country.

Under the 2010 terms, DDU (delivered duty unpaid) along with DAF (delivered at frontier) and DES (delivered ex ship) is to be replaced by DAP (delivered at place). FOB, CFR and CIF are archaic in that they don’t take into account the role of a freight forwarder in modern sales contracts, placing responsibility on the seller to deliver the goods onboard the ship. "In the new incoterms they will be at the back of the book with a very clear explanation that they are not applicable for containerised transport," Ronai says. "It will also explain these terms are not appropriate for use where goods are handed over to the carrier before they are put onboard the vessel, for example, goods in containers, which are typically delivered at a terminal. In such situations the FCA/CPT/CIP term should be used."

Some of the commonly used terms contain inherent problems. Ex works (EXW) is an example, Ronai says. The term means that the buyer arranges for collection of the goods, ex works. In reality the seller often loads the goods onto the collecting vehicle on behalf of the seller, but who is liable if they are damaged during the transition? Another factor to be aware of, he warns, is that the buyer’s freight forwarder will be declaring the export to customs in the seller’s name, with or without their authority, because although EXW means the seller is not responsible for export formalities in the country of export, of course, overseas buyers don’t have an ABN or the means to perform this function. What happens if the freight forwarder’s declaration is incorrect? The liability comes back on the seller. "Ex works in the new incoterms will be much clearer but it really only applies to within borders or within trading blocks and if it’s desired that the seller is to load the collecting vehicle then it says the FCA term should be used." Ronai says sellers should resist freight forwarders’ attempts to have them fill out a letter of instruction. "The seller is not engaging that freight forwarder, the buyer is." Conversely DDP means the seller has to have an import permit to clear the goods through customs in the importing country. "It’s fraught with danger. You could be asked to quote DDP to a country where they might decide to jack the duty rate up in the meantime and you’re caught unless you’ve got some clause in your contract." Ronai says DDU, a term that has been dropped from the 2010 lexicon, also exposes the seller to risk. Although the buyer is responsible for customs clearance, the seller is responsible for loss or damage all the way up to delivery to the buyer. "I would always recommend against that, especially if you have long lead times. Imagine trying to organise insurance investigations and surveys in a foreign country."

The way to go

Instead of EXW and FOB he advises exporters to use FCA, seller’s premises, which makes the seller responsible for customs formalities, either directly or through a freight forwarder. "It’s a multi-modal term, you can use it for sea or land, and once you hand the goods to the carrier all the costs are the buyer’s." Small consignments are another potential problem area. Less than container load (LCL) freight is commonly collected by the buyer’s freight forwarder who delivers it to a consolidator who may warehouse the goods until they have a container load. Under FOB terms the seller would remain liable for these goods until they are onboard, even though they are unlikely to have any means of tracking them and won’t receive a bill of lading until after the ship has sailed.

Ronai advises exporters avoid FOB or FCA terms because the seller loses control of their goods to the buyer’s freight forwarder. This is especially critical if the exporter is dealing with a letter of credit where the bill of lading must be correctly issued, but the seller is not in a position to compel cooperation from the buyer’s freight forwarder. He recommends using prepaid C terms, not D terms, where the seller prepays the freight, has the choice of their own freight forwarder and responsibility for loss or damage to the goods ceases in the country of origin. "CPT is the equivalent of CFR and the buyer’s risk starts at the point when the seller gives the goods to the carrier but the price includes the cost of transport to an agreed location in the buyer’s country. Typically that includes that land costs at this end, port charges, freight and delivery to a container terminal." The seller benefits from having their goods handled by a chosen specialist and has an opportunity to increase their profit through terms on financing the freight. If the agreement is under a letter of credit the seller can specify what they require on the bill of lading, and if they are sending multiple consignments to multiple buyers they can be centralised through one forwarder. Finally, "Use the current incoterm", Ronai says. Exporters need to understand and more importantly control the terms of freighting their products to overseas markets.

"Don’t use the internet,’ Ronai warns. The only reliable source for updated incoterms is the International Chamber of Commerce book Incoterms 2010, available from your local state chamber of commerce or www.iccbooks.comfor around AUD100. Webinars presented by experts Corinne Campbell and Lance Scoularhe explain the updated incoterms. What you will learn: Overview of incoterms 2010 rules Differences between the old and new versions Role in sales/purchasing contracts Application to payment terms