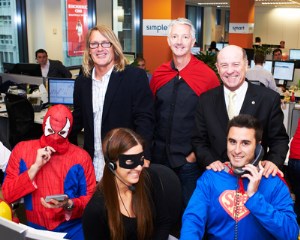 Staff of OzForex swapped their suits for superhero capes, and raised $100,000, as part of the company’s annual Charity Day on August 9. The global fundraising effort proved that anybody could be a hero, as OzForex staff across the world dressed up, and worked around the clock, in the name of charity. The effort was met with an overwhelmingly positive response from customers, who were enthusiastic about contributing to a good cause. OzForex’s global profits for the day, which reached $100,000, were directed to five diverse charities: Sumba Foundation Australia, Canadian Centre for Abuse Awareness (Toronto, Canada), Cerebral Palsy Education Centre (Melbourne, Australia), Demelza House (London, UK) and Starship Foundation (Auckland, NZ). "We believe it is very important for companies to give back to the community, and as a global company we have chosen international as well as Australian charities," said OzForex CEO Neil Helm. "From helping people get access to clean water, to helping children and young people with serious medical needs, to supporting victims of abuse, the international transfers made on our Charity Day will benefit all of these causes," he said. Garry Prigg, chairman and CEO of the Cerebral Palsy Education Centre (CPEC), welcomed OzForex’s support for CPEC’s vital work with children. "Early intervention can really transform the lives of children with Cerebral Palsy and their families, and can lead to them having more independence and options. We welcome OzForex's support and the awareness raised through Charity Day. This donation will be used to assist the developing of our international education and training division," he explained. Charity Day is just one example of OzForex’s overall commitment to charitable causes. The company recently raised $15,000 for this years’ Dry July, to help create better support networks for adult cancer patients and their families.