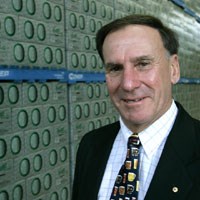 While Australia escaped the worst of the global financial crisis, there's no doubt that a number of our destination markets were badly affected by the downturn. Fortunately, there were a number of exportersthat not only survived, but also thrived in this period.

Of all the industries to suffer during the global economic downturn, the alcoholic beverage sector should not have much trouble staying afloat. After all, many people turn to alcohol to celebrate-or commiserate. However, the past 12-18 months hasn't been easy, admits Glenn Cooper, chairman and marketing director of Coopers Brewery, but there have been pockets of international growth that have won them unexpected success. "We've opened an office in New Zealand and that has had terrific growth; we've had a threefold increase since we opened about eight months ago." Coopers has also begun its entry into two large and difficult markets: the United Kingdom and the United States. In England, it has seen some success as a niche product sold through wine club Bibendum, which offers the beer to its membership: "They like to make offerings to their members of products that are a bit harder to get and they've done quite well with that." While the USA has been difficult due to the rise in the Australian dollar against the greenback, Cooper has faith that the brand will do well there. "We have a great belief in the US because the craft beer market is growing and Coopers fits nicely into the craft beer market," he says. "It has a lot of strength in cities like Chicago, New York, San Francisco, those trendy Sydney-style cities. You now see bars only selling craft or upmarket beers." The other side of Coopers success is the renewed interest in home brew worldwide. According to marketing manager of Brewing Products Scott Harris, Coopers owns about 60 percent of the world's home brew market. "Traditionally the home brew markets are the ones that are highly taxed on alcohol: Australia, New Zealand, Canada and Scandinavia. Most people start making it to save money but what happens over time is taxes change and then people pick it up again as a hobby," he explains. Of the countries where home brew is gaining popularity, Harris points to Canada, which is undergoing what he describes as resurgence: "Beer is relatively expensive still, and they're quite big beer drinkers. We've gained new distribution through the supermarket trade, which has helped." The UK is growing at the premium end as drinkers move away from everyday beers and try their hand at their own creation, notes Harris, and elsewhere in Europe there are countries emerging as burgeoning future markets. "Some of the former Eastern bloc countries like Poland are just starting to grow," he says. "They drink a lot of beer and it's more of a hobbyist thing at this stage. We have interest in places like Hungary as well. All those Eastern bloc countries are quite big beer drinkers but it depends on what their income level is as to what they pay for their beer." Across Asia, the price of beer is low, so it's surprising to learn the market there is also steadily growing. Harris says customers in that region consist of a combination of hobbyists and microbreweries. "There are guys who will brew it because it's a hobby. Beer is relatively cheap in Asia so no one's going to do it to save money, really. But then there are other markets where in China or Vietnam for instance they have lots of little restaurants and some of them are brewing the beer and selling it in their own restaurants rather than brewing it for their own consumption." Overall, it's the burgeoning middle class that will give Coopers its future market. "We're keeping an eye on the former Eastern bloc, and we're always scanning for what's happening with tax and increasing income. We're always looking for emerging markets where we think we'll fit."