‘UK wine exports are at their highest level in a decade’
Rachel Triggs, Wine Australia read more
Our new e-magazine is OUT NOW. Click here to read.
REGISTER ADVERTISE
SUBSCRIBE TO OUR FREE NEWSLETTER
PUBLISHED | MAY 31, 2010
COMMENTS | NONE
Tweet 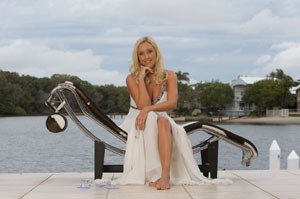 If the shoe fits, wear it all summer. That's one message you could take from Holster Fashion's products. "We wanted an alternative to a leather shoe, one a lady could wear on the beach all day, walk through the water in and then throw on a dress and go out to dinner in the same pair. We stumbled across jelly material and started making our own designs," says Holster co-founder Ben Nothling. With wife Natalie Miller, Nothling has created a brand they want to become a household name. A chance meeting at a job interview brought them together. Six months later they were holidaying in Indonesia, when they decided to start a trade in surfboard bags and shell belts. "She was just about to start a business degree and I had just finished mine and we saw some potential to import products," explains Nothling. "We sold 500 shell belts in two weeks, so we imported more and started importing leather shoes, and then started designing some." Discovering the jelly material then gave them a selling proposition distributors found hard to resist. First it was a New Zealand distributor, then their fame spread throughout the Pacific after exhibiting at a trade show. Now, the offers won't stop. "Distributors come to us and say 'we want to sell your shoes in Germany' then bang, they're up there with Ipanemas or Havianas," says Nothling. The Noosa-based brand is proud of its origins, marketing the product with references to the popular beachside area, he says: "People in Asia, Europe and the Middle East especially love that." But while Holster design product and run their operations from Queensland, they manufacture in Asia, predominantly China, because of the volumes required. "Last season we did about 230,000 pairs and this season we'll do about 500,000." The success of the brand unfortunately has a downside: copycats. Currently it deals with infringements legally, but Holster has also looked into patents as well as enhancing product development. "Every season we have new designs and because they're all made in moulds it costs a lot of money to copy," explains Nothling. "We invest a lot of money in our new designs, just to stay ahead of the pack." Also impressive is how they've made business into an art form, with media coverage-"UK Grazia named us 'find of the week' for summer"-transforming into sales, and sales turning into future designs: "Every market is very different, and we design for the markets. Something might be huge in Europe and the UK, but slow in Japan. We don't look at other brands or what's on the catwalk, it's just from our experience," says Nothling "A lot of people think it's glamorous, but there's a lot of hard work. We work a year in advance sometimes. We're always developing."