The sound of androgyny: what's in a name? 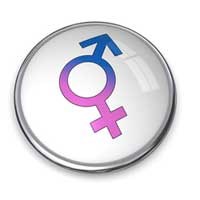 It all started with my Dutch translator Eske. For years I had worked with him over the internet and even though we had never met nor spoken over the phone, I had the feeling we were close colleagues and I somehow even pictured him. Surprise caught me one day when he called me to clarify my instructions and it became clear that "he" was a "she"! I was quietly embarrassed for being so ignorant! I had just assumed he was male even though I hadn’t heard the name ever before. Well, a few years passed and my long term Thai translator Rudi and I were working on a multilingual project when he called me to discuss it. A sweet voice with a charming Thai accent greeted me and I almost dropped the phone when I realised that it had happened again! Now, Rudi is a very traditional boy’s name in Germany (I had always thought it bizarre that a Thai translator had such a traditional German name that conjures up "Lederhosen" and the Bavarian "Oktoberfest" ). So, after all these years ... Rudi is a Rudeena! Wow, goes to show you can’t ever assume anything in life. Then came the Soccer World Cup and many late nights and early mornings for me cheering for the Socceroos, die Mannschaft and Les Bleus. I was working on an Arabic/German project with my outspoken Arabic translator Sam and I would email him about soccer every night ... until I got a job request from a lady who said that Ms Sam B. had kindly recommended me for a German translation. I cracked up laughing, somehow relieved this would happen to other people as well, and I sent my clearly male Arabic translator an email with a few jokes about him being a girl. Well ... need I say anymore? Sam sent me a picture of (yes you guessed right) HER! So let’s have a look at these androgynous names here in Australia. Back in 1907, in the Ozma of Oz, Dorothy encountered cyclones and earthquakes and other miraculous happenings but one odd occurrence she simply could not accept: a woman named Bill. Even if that "woman" happened to be a talking chicken. "But it's all wrong, you know," declared Dorothy, earnestly; "and, if you don't mind, I shall call you 'Billina.' Today androgynous names are much more common, with more and more male names adopted for girls' use every year. Addison, Skyler and Bailey are just a few of the many names that sounded solidly masculine a generation ago, but now rank in the "who can tell?" category. Yet a girl named Bill sounds just as unlikely today as she did in 1907. Parents are selective in their gender flipping. Androgynous names have key elements in common: Names that were in use exclusively for boys 40-50 years ago, but now sound androgynous or feminine are names taken from surnames: Parker, Kelsey or Peyton; names with sounds and rhythms typical of female names (Avery, Aubrey); names that seemed new and unusual 50 years ago and emerged into popularity for boys and girls simultaneously (Devin, Darian); and nicknames, a group which has always been more fluid with gender assignments (Drew, Alex). Meanwhile the traditional English boys' names remain steadfastly masculine. If you look at the most popular names of 100 years ago, from #1 John to #200 Roscoe, only two names--Lee and Marion--would give you a moment's gender confusion. Today's androgynous names are yesterday's "fancy" names, the too-precious monikers that stood out in a field of Tom, Dick and Harrys. Even names that have become masculine standards in the ensuing years, such as Cameron, retain an echo of fanciness that leaves them open to reassignment. And as for the classic fancy-lad names, girls named Chauncey and Chesley are doubtless right around the corner. So, no more surprises for me anymore...all of my translators have the potential to be both genders now...I don’t care...as long as their translation work remains excellent and ...as long as Bills will still be roosters and not hens!