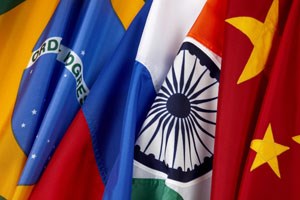 It is now exactly 10 years since Jim O’Neill, then the newly appointed Head of Economic Research at Goldman Sachs wrote a research paper "Dreaming with BRICs" in which he predicted that the global economy in the coming decades would be propelled by the growth of four populous and economically ambitious countries: Brazil, Russia, India and China, and famously coined the acronym "BRIC". While Jim had already gained recognition and widespread respect for his previous work as an economist and currency analyst, he acknowledges that his career has now been shaped in large part by this simple term. While many eyebrows were raised at the time by some of his more dramatic predictions, notably the one that China would overtake the US to become the largest economy in the world within 30 years, the BRIC concept is now almost a household term, widely recognised within the media, academia, business circles and certainly by the investment community.  At the end of 2009, Jim’s BRIC research was widely acclaimed as the "Call of the Decade". With the benefit of 10 years since he first invented the BRIC acronym, it is worth pausing to reflect on how much the world has changed since 2001. As Jim wrote this week in an article in the UK Telegraph in which he reflects on the progress of the BRICs over the last decade: "All four of the BRIC countries have exceeded the expectations I had of them back in 2001. Looking back, those earliest predictions, shocking to some at the time, now seem rather conservative. The aggregate GDP of the BRIC countries has close to quadrupled since 2001, from around $3 trillion to between $11 - $12 trillion. The world economy has doubled in size since 2001, and a third of that growth has come from the BRICs. Their combined GDP increase was more than twice that of the United States and it was equivalent to the creation of another new Japan plus one Germany, or five United Kingdoms, in the space of a single decade. Some observers say the effect of the BRICs on the world economy has been exaggerated because their growth was primarily driven by exports to the developed markets, as well as the rise in commodity prices. Exports certainly played a major role for China, but since the 2008 credit crisis and the consequent fall in demand in the US and elsewhere, that is no longer the case. For India, domestic demand has been the driver throughout the last decade, and increasingly it is the domestic consumer as well as an increase in infrastructure spending that is fuelling growth in the BRIC economies. The credit-fuelled growth in US demand certainly played its part in their ascent, but even since 2008, and despite the ongoing US struggles, the BRIC economies have continued to power ahead. However you choose to interpret the data, the importance of the BRICs in global economic growth is beyond dispute. Personal consumption in the BRIC countries has skyrocketed. In China, between 2001 and 2010, domestic spending increased by $1.5 trillion, or roughly the size of the UK economy. The increase in the other three was about the same, perhaps slightly more. BRICs now account for probably close to 20 percent of world trade compared with less than 10 percent in 2001." Whilst the BRIC idea was first dreamt up as an investment idea or theme, designed to challenge the thinking of investors and their professional advisors, even Jim has been surprised by how quickly the BRIC countries themselves have started collaborating via their annual BRIC (now "BRICS" to include South Africa), Leaders Summit which has met every year since 2009 to discuss opportunities for political, economic and even trade collaboration. The recent BRICS Leaders Meeting in China in April 2011 laid the tracks for greater 'intra-BRIC' trade and investment co-operation in the years ahead.  This is vital to the global economy and should be occupying the minds of all forward thinking business leaders, investors and entrepreneurs. 'Intra-BRIC trade', or trade among the BRIC members, has grown at the rate of 30 percent per annum since 1999 and now accounts for 8 percent of global trade. During the last 10 years, intra-BRIC trade increased nine-fold, compared to global trade which only doubled over the same period. In recent years, Intra-BRIC trade has been mainly characterised by Russia and Brazil supplying natural resources to satisfy the industrial and infrastructural needs of India and China. However, this is likely to change. Watch out for more investment and trade deals between the BRICs as they create their own trading bloc and invest in each other’s capabilities. 10 years later, it is time to acknowledge Jim O’Neill’s vision, foresight and thought leadership. But as he reminds me from time to time, the BRIC idea has a long way to run yet!