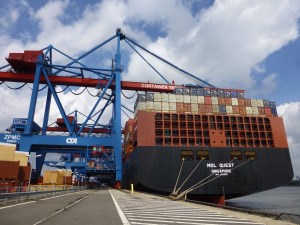 Long answer: a $60m boost to the Export Market Development Grant. (And a bit for agricultural exporters and some infrastructure.)

“There’s not much by way of new initiatives for exporters in the 2019-20 budget, but at least the new money that is there is being spent wisely – on EMDG,” said Heath Baker, acting CEO of the Export Council of Australia.

Analysis by KPMG in 2015 found every $1 the government spends to encourage Australian businesses to market their goods and services internationally, $7.03 is returned to the Australian economy.

“The return to surplus – the centrepiece of this budge – is built on the back of resources exports. Australia critically needs to diversify its export base so that when resources inevitably cycle lower, other export sectors can fill the void,” said Mr Baker. “But other than EMDG, this budget contains little for exporters.”

There is little new money in the budget to support exporters, or address the structural factors that make it so difficult to export:

On the plus side, the budget includes $16.5m in new money for agricultural exporters, and $12.9m to continue existing programs.

This money is mostly targeted at measures to reduce barriers to trade (such as the lack of scientific protocols that enable market access).

And $68m will go to revitalising freight rail in Tasmania.

The Budget also provides $50 million over three years for a National Tourism Icons Program for vital tourism infrastructure and upgrades.

Foreign Affairs Minister Marise Payne says the government is further assisting exporters by deepening its engagement with partners and allies across the Indo-Pacific region.

“We also continue to pursue our trade and investment agenda that opens new markets for Australian exporters across a wide range of industries, helping to build a stronger economy and create more Australian jobs.”

Infrastructure funding for the Pacific region

The government will invest an estimated $4 billion in Official Development Assistance (ODA) in 2019-20.

Aid to the Pacific is at a record high level of $1.4 billion, says Senator Payne.

The $2 billion Australian Infrastructure Financing Facility for the Pacific (AIFFP) will be operational by July 1 this year. It delivers quality infrastructure to Australia’s Pacific partners, while leveraging private sector investment and avoiding unsustainable debt burdens.

The Department of Foreign Affairs and Trade (DFAT) will receive an additional $12.7 million to manage the AIFFP.

Also, the government is increasing the ability of Efic to help finance infrastructure projects in the Pacific by granting it a new overseas infrastructure financing power and increasing its callable capital from $200 million to $1.2 billion.

The government will also invest $121 million to provide technical advice to ASEAN governments on how to best manage infrastructure development including avoiding debt traps.