'USMCA is the most important deal we've ever made by far’
US President Donald Trump read more
Our new e-magazine is OUT NOW. Click here to read.
REGISTER ADVERTISE
SUBSCRIBE TO OUR FREE NEWSLETTER
PUBLISHED | SEPTEMBER 2, 2018
COMMENTS | NONE
Tweet 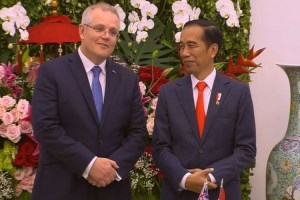 Australia’s farmers are the big winners under the new the Indonesia-Australia Comprehensive Economic Partnership Agreement (IA-CEPA).

Tariffs will be slashed on nearly all Australian agricultural exports to Indonesia – including livestock, beef and sheep meat, grains, sugar, dairy, citrus and horticulture.

The landmark trade agreement was announced in Jakarta on Friday following a meeting between Prime Minister Scott Morrison and Indonesian president Joko Widodo.

Mr Morrison, who was on his first official foreign visit as Prime Minister, said both leaders were confident the deal would be signed by November this year.

Indonesia is Australia’s fourth most important agriculture market, making up almost half of its total exports to Indonesia. It is worth $3.5 billion to the Australian economy.

“This agreement improves access for industries which trade most to Indonesia, including our livestock, beef and sheepmeat, grains, sugar, dairy, citrus and horticulture,” said Agriculture Minister David Littleproud.

Mr Littleproud said the agreement would deliver duty free access for half a million tonnes of feed grains per year.

“Our wheat industry exported $1.3 billion worth of produce to Indonesia in 2016-17 and this will grow that further,” he said.

“The agreement will increase duty free access for live male cattle by 4 per cent a year to 700,000 head annually.”

Tariffs on most lines of beef and sheepmeat will be reduced from 5 to 0 per cent on signing, with remaining tariffs to be removed after five years.

“This will help us build on the $261 million that these exports were worth to Australia in 2016-17,” Mr Littleproud said.

“Our grain farmers will get guaranteed duty free access for 500,000 tonnes of wheat, barely and sorghum grains per year increasing at 5% per year to 775,664 tonnes.

“Tariffs on our sugar cane will drop from as high as 12 per cent to 5 per cent.

“Oranges and limes will get increased duty-free access while dairy, mandarins, potatoes and carrots will get reduced tariffs.”

Mr Littleproud thanked former trade Minister Steve Ciobo and his department trade division for their hard work in helping to seal the agreement.

AUSVEG CEO James Whiteside said the IA-CEPA would create the framework for a new era of closer economic engagement between Australia and Indonesia.

Australian vegetable exports to Indonesia were valued at $3.7 million this financial year, with potatoes accounting for nearly half of the total.

“Given Indonesia’s developing population and its proximity to Australia, this market has strong potential for local growers to boost their fresh vegetable exports,” Mr Whiteside said.

The agreement would help the vegetable industry in its quest to increase its export value to $315 million per year by 2020 – an increase of 40 percent from 2016.

“Trade agreements with neighbouring countries such as the IA-CEPA helps provide our industry with confidence that it can continue to prosper through developing export markets, which helps secure the profitability and competitiveness of the Australian vegetable industry,” he said.

Under the new agreement, Indonesia will receive 100 percent tariff reductions on imports into Australia, including petroleum, wood, furniture, textiles and footware.

“Because we know from first-hand experience that free trade works. It has underpinned Australia’s economic success for more than half a century and fuelled Asia’s rapid growth.”

Under the IA-CEPA more than 99 percent of Australian goods exports to Indonesia will enter duty free or under significantly improved and preferential arrangements.