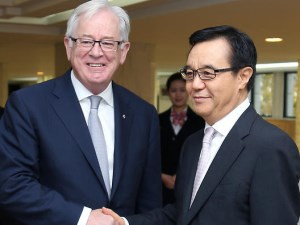 Minister for Trade and Investment, Andrew Robb has been named Policy Maker of the Year at an awards ceremony in Hong Kong.

The Gold Standard Award also recognised Mr Robb as being one of the key leaders in the negotiations to the conclude the Trans Pacific Partnership (TPP) after seven years of talks.

The TPP is a trade pact between twelve Pacific Rim countries which, Minister Robb said, “has truly transformational promise” in international trade.

Mr Robb said it was “both humbling and a very great honour to be recognised by Public Affairs Asia with The Gold Standard Award for Policy Maker of the Year.”

“The Japan and Korea agreements already are delivering strong benefits and the China free trade agreement will come into force before the end of the year,” Mr Robb said.

The three markets account for 52 per cent of Australia’s global exports.

“Freer trade and more investment is a critical driver of growth and jobs and prosperity,” Mr Robb added.

This was the key factor for the Australian Government’s motivation in pursuing such comprehensive agreements.

When fully implemented, 97 per cent of Australia’s exports will receive preferential or duty free access to these partner countries, Mr Robb said.

The award was accepted by Australian Consul-General, Mr Paul Tighe, at a presentation yesterday in Hong Kong.

“It also acknowledges the significant effort that Minister Robb and the Department of Foreign Affairs and Trade have made to engage all the stakeholders in these important trade agreements,” Mr Tighe said.