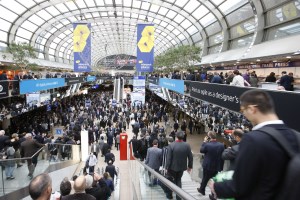 Messe Du¨sseldorf, a German-based leader in international trade fairs, has opened a new office in Sydney to promote its major shows to Australian exhibitors and buyers.

During an Australian visit this week, Wolfram Diener, Operative Managing Director of Messe Duesseldorf, unveiled the company’s ambitious plans for the APAC region.

He also announced an impressive calendar of trade shows and events across the globe for 2019-2020.

Mr Diener was in Sydney to launch the new Sydney office, to be headed by Gabi Schwager, Director of The Exhibition Coach Pty Ltd and a former executive with Messe Du¨sseldorf.

“We welcome Gabi to the Messe Düsseldorf family once again,” he said.

“Though our two countries are some 15,000 kilometres apart from each other – our ties have traditionally been good and close,” he said

“Australia is an important strategic partner for Germany in the Asia-Pacific region.

“And international trade fairs are an important instrument for strong economic relationships.”

Australia’s key export commodities to Germany are gold, precious metals, coins and agricultural products (oil seeds). Key services such as education, science and advanced medicine are also on the rise.

From 2013 to 2018 some 33,000 exhibitors and buyers from Australia have visited Düsseldorf trade fairs.

They were particularly interested in printing and packaging technologies, medical devices, plastics and rubber technologies, casting and metallurgy technologies as well as in wines and spirits.

With the opening of the Sydney office, Messe Du¨sseldorf is keen to attract more Australian visitors to our shows, says Ms Schwager.

“I’m very proud to be appointed as their representative in Australia.”

On average Messe Du¨sseldorf holds 50 trade shows at its site in Germany and 70 throughout the world. This includes 22 of the world’s leading trade events.

The shows that attracted the most attention for Australians last year included:

“Du¨sseldorf is in the heart of Europe – just 30km from the Netherlands, 200km from Paris and less than 1hour from London by air,” said Mr Diener.

“It’s an international marketplace – a platform where you can meet the world.

“It presents a great opportunity for Australian companies to showcase their products and services.

“And don’t expect to meet only European buyers – on average about 72 percent of buyers are from abroad.”

Last year, Messe Du¨sseldorf generated €290 million in revenue from its trade events worldwide. This year, with more major shows on offer, they expect a much stronger result.

“As 2019 will have a larger number of events, Messe Du¨sseldorf GmbH are expecting a revenue of around €322 million,” Mr Diener said.

“The next 16 months will be the busiest period for the company in the past 12 years.”

Ms Schwager says digitalisation and sustainability will be the key focus for all sectors in the future.

“And with advances in technology you can expect to see new trade shows emerging in the near future.”

26 events held in Düsseldorf last year with 23,000 exhibitors (91 from Australia) and more than 1.02 million visitors.