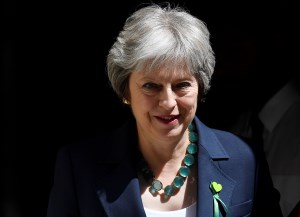 British Prime Minister Theresa May is offering a “bold new” Brexit plan in a last-ditch effort to get her still-unpopular Brexit deal approved.

She has outlined a 10-point strategy, which opponents claim is just repeated compromises or plans she’s previously offered.

However, the PM has offered a few notable concessions, including a vote on a second referendum and a vote on a type of post-Brexit customs arrangement with the EU.

A vote on a second referendum is quite significant.

Until now May has firmly resisted the idea of a second referendum which has Labour opposition support.

May’s other concession, on the customs union – where EU members trade without tariffs and minimal customs checks – offers a choice that will please neither the pro-Brexit camp in her Conservative Party or the opposition Labour Party.

May proposed a vote on whether MPs want a temporary customs union membership after Brexit, or a plan for a “customs arrangement” that would allow the UK to trade with the EU, but still pursue its own independent trade policy.

The referendum and customs arrangement concessions are attempts to win over opposition Labour party members following in breakdown in talks between May and Labour leader Jeremy Corbyn last week.

“It’s basically a rehash of what was discussed before,” Corbyn said after that meeting.

But in a major speech this week, May warned that her deal was the only way to avoid "a nightmare future of permanently polarised politics".

Chancellor Philip Hammond is also urging MPs to compromise, saying a “no deal” Brexit is “reckless and dangerous”.

And Trade Secretary Liam Fox said MPs had to “honour your contract with voters” by delivering Brexit.

Her “bold new offer” was again greeted with disdain by most of the people she needs to convince.

The PM promises to introduce legislation next month that would address many of the criticisms of her deal.

The 10-point offer which she calls her “New Brexit Deal” would:

Parliament would be given the power to ultimately decide whether the UK should leave the EU Customs Union.

And the Brexit legislation would also include “a requirement (for MPs) to vote on whether to hold a second referendum” before the UK leaves the EU.

"Reject this deal and leaving the EU with a negotiated deal any time soon will be dead in the water," May warned.

"Extending it for months more - perhaps indefinitely - risks opening the door to a nightmare future of permanently polarised politics."

May’s Cabinet met for three hours earlier this week to discuss the plan and were reportedly split on many points.

Brexit has been delayed to October 31, but the summer parliamentary break means the government urgently needs to get the deal through the Commons.

However, May could end up with even less support for her Brexit deal than the last time she tried.

Some Brexiters who supported May’s deal on the third Commons vote, as the original deadline approached, are now backing away.

And Labour leader Jeremy Corbyn says he will not support the bill.

“It's basically a rehash of what was discussed before,” he said. “There's also, of course, the question of the deliverability of it. The Prime Minister has already indicated she's going to leave office.”

Brexiteers largely oppose any sort of customs arrangement with the EU after Brexit, and most don’t want to attempt a second referendum.

The prime minister had previously said that she would set a timetable for her departure after the vote on her Brexit plan and the necessary legislation to get the UK out of the European Union before the October 31 deadline.

That’s tentatively scheduled for the first week in June.

Conservatives who are eager to replace May will want her out as soon as possible – though whoever takes over as the next prime minister will inherit the same Brexit mess.

Boris Johnson, one of Brexit’s strongest supporters, is openly campaigning for May’s job even though it hasn't been vacated yet.