'The India free trade deal will give Australian businesses unprecedented access to one of the world’s fastest-growing economies’
David Knowles-Pitcher Partners read more
Our new e-magazine is OUT NOW. Click here to read.
REGISTER ADVERTISE
SUBSCRIBE TO OUR FREE NEWSLETTER
PUBLISHED | NOVEMBER 10, 2017
COMMENTS | NONE
Tweet

Get set for the world’s biggest online shopping frenzy 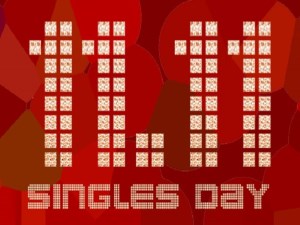 The Singles Day sales begin in China tomorrow with billions of dollars set to change hands in a 24-hour period.

Singles Day is said to have originated in the 1990s by single Chinese college students as an “Anti-Valentine’s Day,” where they – for once – would be able to celebrate their singleness.

The date November 11 (11.11), was chosen because of the number “1” (symbolizing a single individual) appearing four times.

The “holiday” only gained widespread popularity after Alibaba founder Jack Ma introduced it as a yearly online shopping event in 2009.

In contrast to Valentine’s Day, where lovers buy each other gifts, Singles Day has become the time of the year where not only singles, but everyone, buy gifts for themselves.

Alibaba online shopping platform TMall.com became the place where people would find special Singles Day discounts for various different brands and merchants, with the event kicking off at midnight November 11.

The main reason why Alibaba chose this date was to fill the shopping slump between the sales leading up to National Day in October and Chinese New Year in January to February.

Not only that, but this “holiday” seemed to have a strong appeal to its target demographic: The young, urban and tech savvy consumer.

The appeal of Singles Day may stem from the Chinese societal pressure to marry young, while the large gender imbalance in the country results in many serial singles. The usual negative stigma around being single can finally be let go of during Singles Day, and singletons are allowed to shower themselves with gifts – for being single.

If you thought Black Friday or Cyber Monday were major shopping holidays, think again. Singles Day trumps both holidays with Alibaba’s revenues surpassing $17 billion in just 24 hours in 2016 – more than double of Black Friday and Cyber Monday combined. This shopping event even set a Guinness World Record in 2015 for highest online sales revenue generated by a single company in 24 hours.

While the larger portion of the transactions happens in these 24 hours, Singles Day does not only comprise of one day, but a whole month. Just as Christmas shopping starts right after Thanksgiving in the US, promotional activities and announcements for Singles Day begins a month before the actual day. It helps the merchants as well as the consumers get the most out of it.

Today, Singles Day not only encompasses all of Alibaba’s online shopping platforms, such as TMall, Taobao and Juhuasuan, but competitors like JD.com, Amazon China, Suning and VIPshop are also offering Singles Day bargains to attract shoppers.

Last year, nearly 10,000 merchants sold to millions of shoppers in China. These also included numerous international brands, such as Apple, Zara, Macy’s, Starbucks, Target, Maserati, Guerlain and Costco. In fact, around 27% of purchases were from international merchants or brands.

Chinese consumers are becoming more and more sophisticated when it comes to international brands, and this presents foreign merchants a golden opportunity to increase their presence in the Chinese market.

How can you participate in the Chinese e-commerce market?

JD.com, or Jingdong Mall, is the second largest online direct retailers in China, with 258.3 million monthly active users as of September 2017.

JD Worldwide was launched in 2016 as a cross-border ecommerce platform to enable international merchants to tap into the Chinese market even without having physical presence in China.

Not needing to have a legal entity or bank account in China lowers the barriers to entry, and JD Worldwide also provides help in marketing to its wide user base and access to its nationwide logistics network.

While JD.com tends to be the preferred choice for product categories such as home appliances and electronic equipment, TMall is the place shoppers turn to for branded clothes, cosmetics and F&B.

Also, TMall is the most popular shopping platform in China, having a B2C ecommerce market share of 57% as of 2016, not to mention the most happening place during the annual Singles Day shopping frenzy.

Just like JD Worldwide, TMall Global is a cross-border platform that enables foreign businesses to sell directly to China.

Among the basic requirements for setting up a store on TMall include:

Although the Chinese regional version of Amazon only had a B2C ecommerce market share of 1% in 2016, there are several good reasons for using this platform for selling to the Chinese market:

To qualify for selling on Amazon.cn, one must have a legal entity outside of Mainland China, be a brand owner or a distributor/retailer, and be listed within the following product categories: