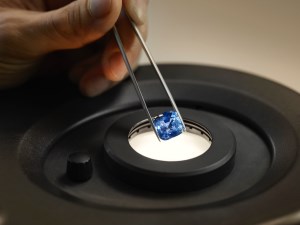 Blockchain technology, which is being widely used to track the provenance of diamonds, will soon be used to create new transparency levels in the coloured gemstone industry.

Blockchain is a global verification system that asserts transparency along the entire supply chain process.

Everledger is combining its proven blockchain-based solution platform with the Provenance Proof initiative established by the Gübelin Gem Lab.

Under the Provenance Proof initiative, the Gübelin Gem Lab is developing technologies to further drive transparency in the gemstone industry.

In the past month, as part of this initiative, this collaboration to establish a blockchain for coloured gemstones has kicked off, aimed at bringing together all stakeholders involved in the lifecycle of a coloured gemstone from mine to end-consumer.

This will be applied to every coloured gemstone and enables a completely new level of transparency across the industry.

Leanne Kemp, Everledger Founder & CEO said: “We are pleased to embark on such a monumental collaboration with the Gübelin Gem Lab, a gemmological pioneer, combining our solution with their patented technology under the Provenance Proof initiative, as a world-first.

“Having successfully applied Everledger’s innovative solution to the diamond industry, it is a natural progression to now expand the application to the coloured gemstones industry.

“There is a strong need for the next-level transparency that will be established by our collaboration in this fast-expanding industry. A steady growth over the past few years has been seen, with estimated global rough gemstone sales for emeralds, rubies and sapphires reaching USD2.5 billion in 2015.”

Gübelin operates one of the world’s most respected gemmological laboratories as a completely independent subsidiary.

In its laboratories in Lucerne, Hong Kong and New York, the Gübelin Gem Lab provides analyses of diamonds, coloured gemstones and pearls, and is particularly known for its expertise in coloured gems.

Raphael Gübelin, President of the Swiss family-run business, of which the laboratory is a fully independent subsidiary, explains: “The concept and technology of a blockchain transforms an opaque business based on trust into a business based on transparency. The combination of the blockchain with the application of physical tracers – such as the Emerald Paternity Test – is a quantum leap for our Provenance Proof initiative. Thinking further into smart contracts, it opens up completely novel business models in our industry, and opportunities to establish more sustainable and fairer practices.”

The project is targeted to be launched to market in mid-2018.

Blockchain was first used to protect users trading online in the cryptocurrency Bitcoin.

The ledger is public, available for anyone to check, and its content is updated collectively by thousands of computers. Through this “shared” ledger you can track the movement of assets with guaranteed safety and security.

Leanne Kemp was quick to recognise how this ground-breaking technology could really change the world.

Founded in 2015, Everledger currently has the provenance of over 1.8 million diamonds cryptographically-certified on the blockchain.

This innovative technological solution has since expanded into the world of fine wine and art, among other industries.