‘Beginning to export can be challenging, but there are massive opportunities for Australian firms’
Karen Andrews, Minister for Industry, Science and Technology read more
Our new e-magazine is OUT NOW. Click here to read.
REGISTER ADVERTISE
SUBSCRIBE TO OUR FREE NEWSLETTER
PUBLISHED | NOVEMBER 24, 2016
COMMENTS | NONE
Tweet

Australia and the future of Globalisation 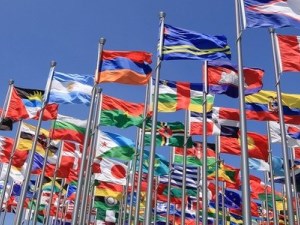 A US president-elect Donald Trump and Brexit have clearly put the forces of Globalisation into play.

How did modern Globalisation begin?

Before 1990 the world was divided into three economic zones, each intermeshing minimally with the other. The capitalist west, the communist east and that poor dependant, often basket case, nations stuck in-between.

In 1990-1 everything changed. The communist bloc fell apart and previously communist nation states along with more than four billion people began to embrace capitalist economic methods.

It was a seismic shift in world geo-economics and the forces it unleashed, almost four billion new workers suddenly dumped into the world labour market and the subsequent effects are still playing out around the globe today in what we call globalisation.

The American led response after 1990 which was burdened with ideology, light on practicality, heavy with hubris – that was to create at least as many problems as solutions if not more so – was the determination to bring those former communist nations states into the world capitalist trading economy … and to do it fast.

How quickly can we do it?

The shortest or quickest way to achieve this very ideologically driven aspirational goal was to transfer wealth from the wealthy western nations in terms of new investment capital, jobs, factories and so on to the poor developing nations such as China and India.

The bill, the cost for this fanciful economic experiment, was to be sent to the western middle classes for payment who were to bear the brunt of this “me gain-you pain” adventurism.

It just didn’t work out and should never have been attempted particularly not with the wildly optimistic expectations that the deeply flawed rationale had to carry along. The numbers just didn’t add up then and still don’t today. It was always a very big ask.

Even for a middle ranking economy in the middle population band with recognised manufacturing traditions it takes great discipline, near absolute social harmony and unrelenting purposeful focus over three decades or more to reach first tier economic status.

For nations as populous as China and India and also lacking other key ingredients the path to even middle economy status in per capita GDP terms could take 75 years or more.

The economic success examples of Japan, Singapore, South Korea and so on have very few parallels with China and India, not least of which are the issues of population mass, social homogeneity and structure, geographical area and base level economic sophistication.

The numbers just didn’t add up

The globalists got it wrong with two key issues; How long it would take to transform the economies of China and India (plus Eastern Europe and parts of South America besides) so that they could become consumer economies trading more or less quid pro quo with the west.

And, how to bridge the huge gap between the GDP per capita between western consumers and the consumers of the newly developing economies where more than half the population are still peasant subsistence farmers. Cost and perception of utility must be roughly the same if two economies are to trade within the value proposition.

Wealth was being redistributed away from western middle classes at a much faster rate  than the size of the total economic trading pie was increasing. Benefits have never caught up with dis-benefit. As time went on the difference between the two points just got wider and the imagined nirvana ever more distant.

Rather than admit they got it wrong what did the globalists do?

Rather than change course or admit error the globalists decided that heavier and heavier doses of ideological economic brute force is what was needed and over a longer time frame.

With all the devotion of the over promoted novice and the mindless brutish banality of the unaccountable bureaucrat they would keep on squeezing the jobs and economic future of the western middle classes until the elusive global outcome they were pursuing came to pass. Like the Unicorn, payoff was always just around the next corner.

How could they convince or dupe the Western middle cases into going along?

This is where it all becomes quite unpleasant.  It can’t be easy to deceive and economically undermine so many people in a rule of law democracy with an independent media over a 25 year plus span of time. The disenfranchised were not told nor was their agreement sought, nor was the effect of this badly thought out experiment explained.

That they should make such a mess of the central purpose of all this upheaval yet achieve so spectacularly in concealing and obfuscating the matter makes the cold war Soviet propagandists look amateurish.

If you can deny a voice to those who disagree with you and then denounce them with impunity then you have stolen (not won) the argument.

The major political parties of the western democracies particularly the English speaking nations fell meekly into line with the new world order. Sure there was some rhetoric and confected bombast but nothing more than that. The people were denied a political voice and democracy was nobbled with surprising ease that history will likely judge quite harshly.

The mainstream media also fell silently into acquiescence to the point of refusing to print stories that did not support or that questioned globalisation and hungrily seizing on any story that cast it in a favourable light. As with all propaganda, accuracy was not a requirement.

Even publishing companies refused to publish books that did not heartily support globalisation.

The basket of confected minority moral outrage issues exploded into a hysterical miasma of mindlessness and madness as the political class and the media kept the public well distracted with politically correct issues of harping hyperventilation.

The minority classes were sold globalisation as creating a starry eyed socialist undergraduate new world social order of genderless brown people being awarded “everybody comes first” basket weaver degrees by a benign intelligentsia who would make every decision for them and punish the morally wicked with “re-education”. Democracy was not even worth a widow’s mite.

Those who disagreed with globalisation were denounced by an exquisitely organised and ever vigilant gallery of denouncers as racist bigots.

The majority of the public if they ever did accept the absurd misinformation propaganda diversions and politically correct moral entrapment was never going to go along with such nonsense while living standards were in free fall and the future looked increasingly bleak.

Once an opportunity came to repudiate Globalisation the voters took it.

Brexit, President Trump and a host of outsider parties and candidates in middle and first rank economies are merely an expression of this. The globalists are now busy fighting a rear-guard action lambasting anyone who voted for Brexit or Trump.

Did Australia gain from Globalisation?

In terms of pay packet purchasing power Australia has lost substantially from Globalisation which is no longer a matter for debate. There have been some one off short term gains such as the mining boom but even here the debts it left behind exceed any net revenues gained.

Other than a handful of micro examples it is hard to see any net material gain for Australia from Globalisation. Particularly when we consider how many jobs Australia has had to give away to get so little in return.

Are the new Australian business opportunities created by Globalisation worthwhile?

In fact, very few new commercial business opportunities for Australia exist in the globalisation sphere outside of minerals such as iron ore and growing agricultural produce. Most of the former is foreign owned anyway and the latter is being hungrily bought up by foreign interests at every opportunity.

Much is promised and talked about for the future but the breathless arguments from 25 years ago are still being recycled and still the alleged elusive payoff for western workers is decades away.

Residential real estate is Australia biggest export to Asia along with low paid job generating sectors such as education services and tourism.

China and India just do not have the per capita consumer goods spending power to make an even trading match with Australia or any western economy and won’t for many years to come. Our services cannot match their cheap labour and they are not yet economically sophisticated enough to pay for value and quality.

Could Globalisation have worked out better for Australia?

It was always a question of purchasing power. Attempting to guarantee zero risk profits and supra normal returns to the financial elites was a silly and poorly thought out act of hubris.

As was force feeding mass immigration to an unwilling and resentful populace that further lowered living standards while giving one off pumps to lazy artificial growth.

Australian wages or labour cost inputs could have been lowered to any level provided cost of living also fell in line with wages.

Workers can be paid one dollar per year provided houses cost three dollars and fifty cents buys 750 loaves of bread. The relativity of purchasing power was always central to the globalisation gambit and the biggest area of hubris, miscalculation and failure. Without purchasing power relativity the disenfranchised western middle class population were never going to go along willingly.

What will an unwinding of Globalisation mean for Australia?

Other than long term geo-economic positioning within an Asia that somewhat resents an Anglo-Saxon outpost in their midst Australia has very little to lose if Globalisation unwinds.

Australian minerals and agricultural exports have always done well, globalisation or not, and will continue to do so.

A halt to the export of Australian jobs and the return of investment capital to Australia is seen by many as a good thing and the start of a well-planned well paid job creating value add manufacturing sector. Such an economic value proposition is to be welcomed.

The mistakes made in this era of globalisation have been made before and the same mistakes what’s more. Even the methods of cover up have been tried before and failed.

That the globalists perpetrated this self-serving, clumsy, rookie scam and got away with it for so long is perhaps the biggest question of all.