No longer is supply chain congestion the predominant cause for concern for Australian importers – instead, manufacturing is.
David Aherne, international freight forwarder read more
Our new e-magazine is OUT NOW. Click here to read.
REGISTER ADVERTISE
SUBSCRIBE TO OUR FREE NEWSLETTER
PUBLISHED | NOVEMBER 13, 2017
COMMENTS | NONE
Tweet 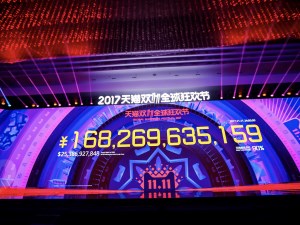 The total gross merchandise volume (GMV) – or the amount of sales transacted on the tech giant’s e-commerce platforms – was nearly four times the combined online sales of Black Friday and Cyber Monday in the US.

The online shopping spree has been held by firm every November 11 since 2009, with brands from China and around the world offering steep discounts on its Taobao market place and Tmall online stores.

The practice started in the 1990s when Chinese university students began celebrating being single and splurging on themselves in reaction to society placing so much emphasis on relationships.

Alibaba chief executive Daniel Zhang Yong: “168.2 billion yuan sales is not only a record in China, but also a record worldwide.

“The number of orders placed on Alibaba platforms reached 777 million as of 23:30pm.

Free trips to the Antarctic

An early glimpse of the buying frenzy was seen as consumers spent 10 billion yuan within only three minutes on Alibaba’s e-commerce platforms after the shopping spree kicked off just after midnight on Saturday.

During a four-hour live broadcast of the Singles’ Day gala event in Shanghai on Friday, Alibaba gave out 270 million yuan worth of rewards, including free trips to the Antarctic.

Rising incomes among China’s 300 million middle-class consumers and their demand for better quality is helping transform the country’s economy from an export- and investment-led model to one that’s driven by consumption, said Joe Tsai, co-founder and vice-chairman of Alibaba Group, which owns the South China Morning Post.

Consumer spending in China accounted for 40 per cent of GDP, compared with almost 70 per cent for the US, and reaching that level would translate to annual spending of US$700 billion to US$800 billion, he said.

How many items in your shopping cart?

“Retail is entertainment,” Tsai told reporters at the Friday evening gala in Shanghai to usher in the event. “Nowadays in China, the first greeting isn’t whether you’ve eaten, but how many items do you have in your shopping cart.”

Rival online retailer JD.com, which launched its own online shopping promotion on November 1, racked up 111 billion yuan in cumulative sales as of 3pm on Saturday, with fashion and household appliances among the most popular categories, according to the company.

Taking Singles Day to the world

Richard Liu, founder and CEO of JD.com, said that over the last decade online merchants have developed to become the major driving force for retail.

“Consumers are increasingly focusing on quality and the experience when it comes to shopping online,” he said.

Tsai said Alibaba wants to export the Singles’ Day 24-hour shopping concept to the rest of the world as the company has committed to serve two billion consumers worldwide by 2036.

Before the official midnight launch of the shopping frenzy, the Tmall logo and slogan “Wish You a Happy Singles’ Day” appeared as LED lights on landmark buildings in cities across the world including Guangzhou, Shanghai, Hong Kong, Berlin, London, Melbourne, Tokyo, Seoul and New York.