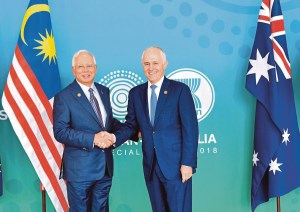 Delegates at the two-day ASEAN-Australia Special Summit held in Sydney have pledged their support for free trade in the region.

Several initiatives were announced during the summit, including initiatives on development of smart cities, infrastructure development, and setting new digital standards to make it easier for businesses to conduct cross-border digital trade.

And leaders of member countries agreed to promote free trade.

Trade liberalisation was a major focus of the summit, with all participating leaders committing to conclude the Regional Comprehensive Economic Partnership (RCEP) by this year.

The free trade agreement has 16 negotiating partners – all 10 ASEAN member states, Australia, China, New Zealand, India, Japan and South Korea – and will cover 30 per cent of global GDP. The RCEP has missed three deadlines since talks began in late 2012.

Noting that there was “very strong support” for a swift conclusion of RCEP, Prime Minister Malcolm Turnbull said that if the negotiating countries secure a good agreement, “this would be … an antithesis to protectionism. It would ensure on the back of the TPP-11 that the Indo-Pacific region continues to be the fulcrum of open and free trade.”

Key to growth and prosperity

Singapore Prime Minister Lee Hsien Loong, who co-chaired the summit, said: “We strongly believe that a free, open and rules-based multilateral trading system is the key to the region’s growth and prosperity.”

A joint initiative with ASEAN countries for adoption and use of international digital trade standards was another outcome of the summit.

The development of the ASEAN-Australia Digital Trade Standards Initiative will provide a framework to support the development, adoption and use of international digital trade standards.

In a speech at the SME conference held before the summit, Mr Turnbull announced  Australia and ASEAN would work together to develop, adopt and use international standards that promote digital trade.

“It will mean up-to-date, harmonised standards that make it easier to do business across borders,” he said.

The initiative will set up a knowledge bank of sustainable urban planning ideas to be shared between ASEAN and Australia.